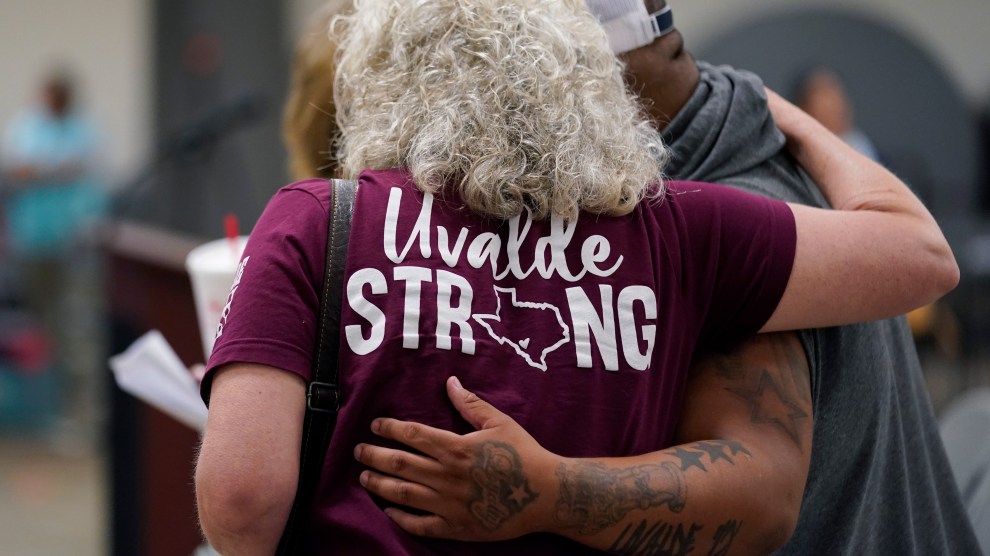 A family member of a shooting victim, is greeted by a friend after a city council meeting on Tuesday, July 12, 2022, in Uvalde, Texas.AP Photo/Eric Gay

In a new report, a Texas Congressional committee criticized the “systemic and egregious poor decision making”  of the local, state and federal law enforcement who were present at the Uvalde mass shooting, in which 21 people died, many of them young children.

“At Robb Elementary, law enforcement responders failed to adhere to their active shooter training, and they failed to prioritize saving innocent lives over their own safety,” the report reads.

According to the document, 142 shots were fired in total, and its authors estimated that 100 of those shots happened before police ever entered the school. 400 officers were present, according to the report.

The 77-page document, which is the most comprehensive single accounting of the shooting to be done so far, is the first official criticism of state and federal law enforcement, in addition to local police, who have already been hammered for their response to the shooting.

“These local officials were not the only ones expected to supply the leadership needed during this tragedy,” the report said. “Hundreds of responders from numerous law enforcement agencies—many of whom were better trained and better equipped than the school district police—quickly arrived on the scene.”

The report spread the blame across agencies for not stepping up to take command of the situation, instead of placing it solely on the Uvalde Police Department. Uvalde officials had previously tried to lobby state officials for a more favorable narrative on their response, the New York Times reported on Friday. According to a document labeled “narrative” reviewed by the paper, officials sought praise for offers rushing into the building to save the children trapped inside even though the officers hesitated on entering the building for an hour and 15 minutes.

adminhttps://australianinternetmarketing.com
Previous articleQuicks Actions To Setting up Your Web Advertising and marketing
Next articleHeatwave: More evacuations as Mediterranean wildfires spread