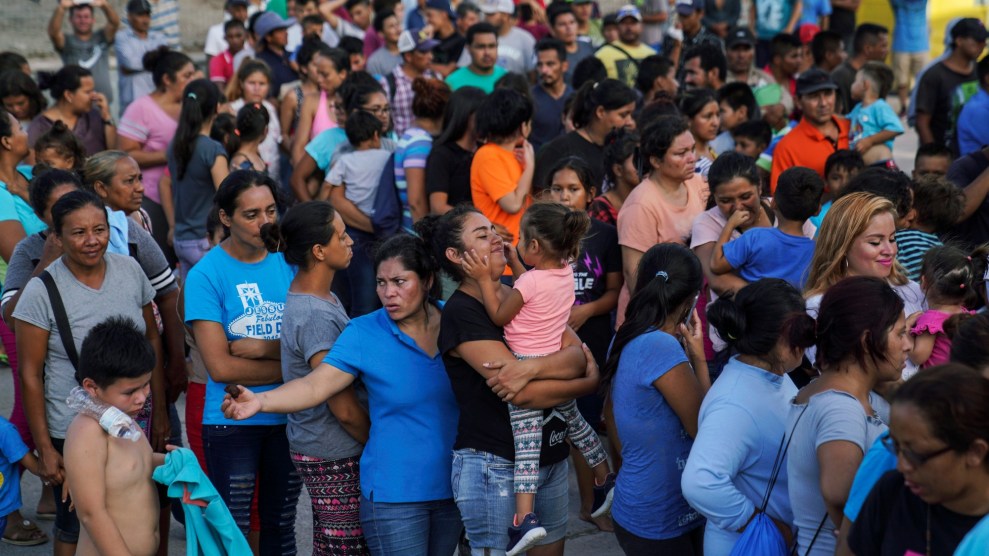 Migrants wait in line to get a meal in an encampment near the Gateway International Bridge in Matamoros, Mexico.Veronica G. Cardenas/AP

In one of the biggest immigration cases before the Supreme Court, and the last case to be decided on this term, the justices determined the Biden administration acted lawfully in terminating a Trump-era policy known as “Remain in Mexico” that pushes asylum seekers to wait in Mexico while their cases go through US immigration courts. In the case of Biden v. Texas, the justices ruled in a 5-4 vote—with Chief Justice Roberts writing the opinion and Justice Brett Kavanaugh joining the majority—that the Department of Homeland Security can wind down the program, formally known as Migrant Protection Protocols, which has left 70,000 non-Mexican migrants stranded in along the southern border, many living in dangerous camps.

“The larger policy story behind this case is the multi-decade inability of the political branches to provide DHS with sufficient facilities to detain noncitizens who seek to enter the United States pending their immigration proceedings,” Justice Kavanaugh wrote in his concurrence. “But this Court has authority to address only the legal issues before us. We do not have authority to end the legislative stalemate or to resolve the underlying policy problems.”

In her dissent, Justice Amy Coney Barrett wrote, “I agree with the Court’s analysis of the merits—but not with its decision to reach them.”

President Biden first tried to terminate the policy in 2021, but the Republican-led states of Texas and Missouri challenged the administration’s action in court. In August, a Trump-appointed federal judge in Texas sided with the states and ordered the administration to reinstate the program. After the Fifth Circuit Court of Appeals and the Supreme Court declined to intervene and block the lower court’s decision, the Biden administration started bringing back MPP in December 2021 following a deal with the Mexican government.

During the oral hearings in April, some justices expressed skepticism over Texas’ argument that the government had to either keep the policy in place or detain all arriving migrants in order not to violate federal immigration law.

As I wrote back in April, a decision on this case could determine not only the future MPP but could also impact the ability of future elected presidents to do away with border policies implemented by their predecessors. Monika Langarica, a counsel with the Center for Immigration Law and Policy at UCLA who filed an amicus brief supporting the termination of the program, told Mother Jones the justices’ ruling could have a “resounding effect on the ability of states like Texas to dictate federal immigration policy going forward,” including another controversial Trump-era border policy known as Title 42.

adminhttps://australianinternetmarketing.com
Previous articleInternet Hosting Suggest That Will Put You Ahead
Next articleImprove Your Businesses Existence Online