Steve Bannon’s Patron Claimed to Be a Billionaire. Now He Says He’s Broke. 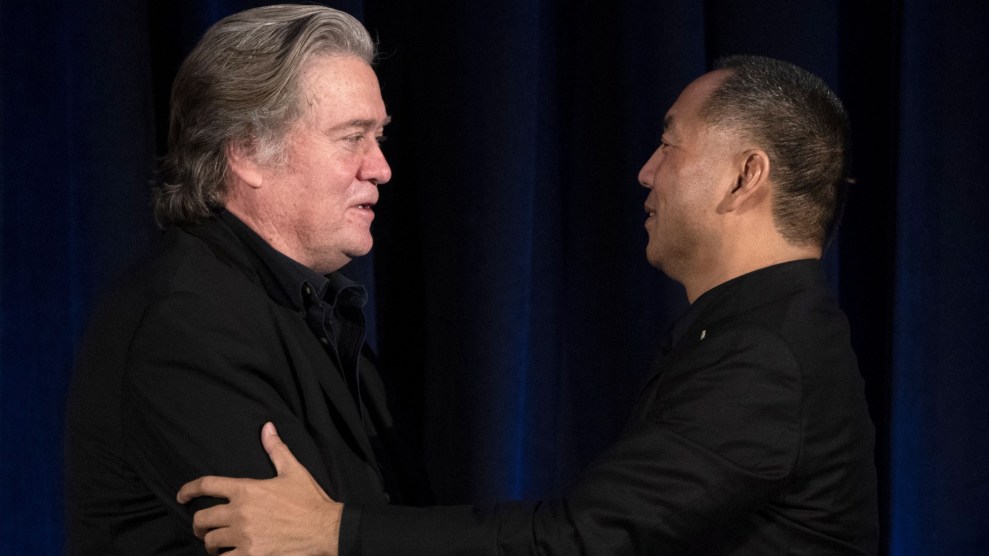 Gou Wengui, an exiled Chinese businessman and patron of Steve Bannon, who has described himself as a billionaire and touted his luxurious residences and a $28 million yacht, filed for bankruptcy Tuesday, claiming he has assets worth just $50,000 to $100,000.

Guo, who is an investor in Gettr, the conservative social media app, filed for Chapter 11 protection in federal court in Connecticut, where sources said he owns property. Guo listed liabilities of $100 million to $500 million. His biggest is $254 million that New York Justice Barry Ostrager has ordered Guo to pay a Cayman Islands-based hedge fund, the Pacific Alliance Asia Opportunity Fund, which sued Guo in 2017 to try to recover a debt dating to 2008, when Guo was involved in real estate in China. The bankruptcy filing came on the day the judge had set as a deadline for Guo to pay $134 million for violating a court order to keep his yacht within the court’s jurisdiction.

Gou fled China in late 2014, ahead of fraud charges, and settled in New York, quickly buying a $68 million Central Park West apartment and joining Mar-a-Lago. In 2017, he began publicly accusing Chinese Communist Party elites of corruption and sexual hijinks. Few if any of his allegations were substantiated, but his efforts helped him win fans among critics of China, including on the US right. After Bannon’s ouster from the White House, he joined forces with Guo, receiving consulting fees and other perks to help Guo launch anti-CCP nonprofits, media companies, and a host of other ventures, many that use the letter “G,” for Guo, and heavily promote his assertions and ventures. These outfits have pushed out false conspiracy theories about Covid, the 2020 election, and other topics.

The bankruptcy filing is an apparent effort to avoid paying Pacific Alliance and other potential civil penalties. Guo’s filing listed creditors that include a number of people who are suing him in cases that remain active.

Guo had already set up complex corporate arrangements that appear aimed at allowing him to try to avoid creditors by denying ownership of assets courts have repeatedly ruled he controls. Gou has “secreted his assets in a maze of corporate entities and with family members,” Ostrager said in his ruling last week. “This scheme has enabled [Guo] to assert that he has no assets despite his lavish lifestyle, which plaintiff has catalogued with material from social media clippings, photographs and videotapes showing [Guo] living large and boasting of his wealth, expensive homes, private plane, and yacht.” Guo used his yacht and other flashy possessions to help market a crypto currency offering, a lifestyle company, and other products to fans. Bannon was living on Guo’s yacht in 2020 when he was arrested and charged with defrauding a charity that raised private funds that were supposed to help build a border wall. Trump, in one of his last acts as president, pardoned Bannon.

Guo’s bankruptcy filing, which does not appear to list as assets his stake in companies that bear his name and homes he has bragged about owning, seems to be his latest effort to avoid paying creditors. “He’s trying to use the Chapter 11 process to avoid lots of debts,” said Sasha Gong, an academic and journalist who was friendly with Guo before falling out with him in 2019. Gong noted that Guo’s list of creditors includes his own family company, Golden Spring New York, through which Guo has made various investments. Guo says that he owes the company about $21 million dollars. This appears to be an effort to shield assets controlled by Golden Spring from creditors, Gong argued.

Selecting The Best Internet Hosting Firm For The Site

Hosting Ideas Your Website Will Manage To Benefit From!