Steve Bannon Is Getting Locked Up 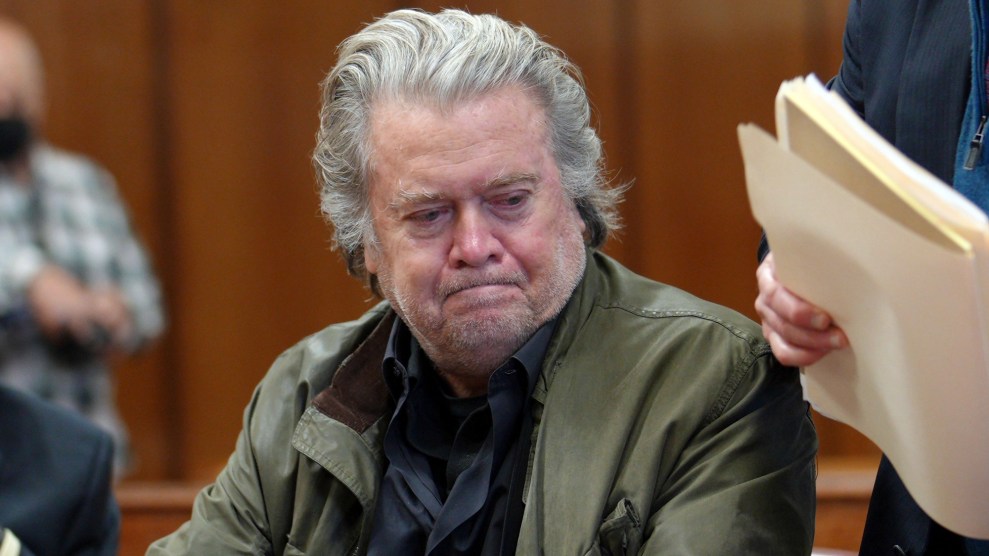 On Friday, Steve Bannon, the former Trump advisor, was sentenced to four months in federal prison for two counts of contempt of Congress. The sentence, which District Court Judge Carl Nicols agreed to delay until Bannon’s appeal efforts are exhausted, came a year after Bannon refused to comply with a subpoena from the House committee investigating the January 6 attack requiring him to turn over records and sit for an interview. Bannon has claimed he doesn’t mind going to jail for that. But his actions suggest otherwise.

In 2020, as January 6 approached, Bannon played up his personal role in Donald Trump’s effort to use phony election fraud claims to retain power on his War Room podcast and elsewhere. He encouraged Trump fans to assemble in Washington on January 6. “All hell is going to break loose tomorrow,” he told listeners on January 5. When the congressional committee investigating January 6 subpoenaed Bannon last year, he flatly refused to cooperate, claiming executive privilege—even though he last worked in the White House in 2017 and never received a clear assertion of privilege from Trump.

As lawmakers and prosecutors moved toward a contempt charge, Bannon used many steps in the process to broadcast an uncompromising stance. “I stand with Trump and the Constitution,” he told the Daily Mail after refusing to appear for a committee deposition in October 2021. “This is going to be a misdemeanor from hell for Merrick Garland, Nancy Pelosi, and Joe Biden,” he said outside federal court after the Justice Department charged him in November. “We’re gonna go on the offense on this.”

On July 12, as his trial neared, Bannon told fans on his podcast to pray for “our enemies” because “we’re going medieval on these people.” Bannon’s vows to force Pelosi and January 6 committee members to testify in his trial fizzled when US District Court Judge Carl Nichols barred him from calling lawmakers or mounting various defenses that Nichols deemed irrelevant. In the end, a jury took just hours to convict Bannon. After that, he vowed to “kill this Administration in the crib” and told the Department of Justice to “suck on it.”

Bannon has insisted in public this sentencing is a heroic act of martyrdom that he is taking with pride.

“I support Trump and the Constitution, and if they want to put me in jail for that, so be it,” Bannon told Tucker Carlson in July after his conviction. But behind-the-scenes Bannon spent years as he crossed legal lines quietly using cooperation, or offers to cooperate, with federal investigators, along other means, to avoid consequences. (This bait and switch is echoed in Bannon’s media techniques: He has cozy ties with prominent national reporters while publicly ripping mainstream media.)

Since he took over the Trump campaign in 2016, Bannon has attempted a high-wire act, promoting himself as insider in the scandal-steeped Trumpworld while working to sidestep the criminal convictions and other consequences that have beset former colleagues. His sentence Friday marks failure in that effort. But it appears to result more from miscalculation than principled dissent.

Bannon was working until the last minute to avoid jail. On the eve of his trial, he offered to cooperate with the January 6 Committee. His bid drew wide press attention. But the extent of it wasn’t clear until this week when a sentencing memo from federal prosecutors revealed the extent to which Bannon and his lawyers had worked to stave off his conviction. On the eve of the trail, prosecutors wrote, one of Bannon’s lawyers, Evan Corcoran, contacted a January 6 committee investigator with a proposal. Corcoran suggested the committee sign onto a joint motion with Bannon asking to dismiss the contempt case. In exchange, Bannon would produce documents and provide testimony, as the panel had asked in September.

But it was too late. Bannon’s belief he could still negotiate was not shared by federal prosecutors, who noted that Bannon had committed a crime, and could not undo it 10 months later. His proposal was like a bank robber suggesting he’d return the money.

Bannon had some reason to think he could avoid punishment. In early 2018, he partly stonewalled a House Intelligence Committee subpoena for testimony about the Trump-Russia scandal, angering even Republican committee members. But he got away with it when the GOP-run House rejected efforts by panel members to hold him in contempt.

Testimony that Bannon did give, to both the House and Senate Intelligence committees, later drew accusations that Bannon had lied to lawmakers. The Senate panel in July 2019 asked the Justice Department to look into charging Bannon with making false statements in a 2018 deposition, the Los Angeles Times later reported. One of the things the panel alleged Bannon had misled them about was Roger Stone.

In their final report, issued in 2020, the Intelligence Committee noted that Bannon told them Stone had “no engagement” with the Trump campaign while Bannon led it in 2016. But Bannon’s phone records showed otherwise. And Bannon himself described those contacts, explaining that the Trump campaign considered Stone an “access point to WikiLeaks,” while testifying as a key prosecution witness at Stone’s November 2019 trial. Stone was convicted of five counts of lying to Congress, along with obstructing Congress and witnesses tampering, though Trump later pardoned him.

He has denied that, and said at the trial that he testified reluctantly, under subpoena. But his appearance as a key witness for Robert Mueller certainly complicates Bannon’ self-styled brand as a man happy to tell the Justice Department to “suck it.”

A Bannon spokesperson also emphasized that Bannon had not cooperated willingly and disputed any comparison between his testimony and offer to cooperate with the January 6 Committee.

“Mr. Bannon spent 70 hours with Robert Mueller, the House Intelligence Committee, and the Senate Intelligence Committee after the White House negotiated his appearance. He then disproved the fake Russia narrative peddled by Democrats and the media,” the spokesperson said in a statement sent Thursday. “The January 6th committee is an entirely different subject and any attempt to tie these separate issues together is deceitful and dishonest.”

Bannon’s next legal problem came in 2020 when he was charged with defrauding Trump backers who donated money to a nonprofit set up to raise private funds to build a private border wall. Federal prosecutors alleged Bannon received more than $1 million from the organization, We Build the Wall, funds he allegedly used “to cover hundreds of thousands of dollars” in personal expenses. Other participants in this scheme pleaded guilty, but Trump, in the final hours of his presidency, pardoned Bannon before he faced trial. The Washington Post reported that Trump was swayed by Bannon’s aggressive support for Trump’s false election fraud claims, despite frustrations Trump had with Bannon, who the former president fired in 2017.

In September, prosecutors in New York hit Bannon with similar charges over the We Build the Wall scheme. In a series of familiarly defiant statements to reporters, Bannon vowed to give those prosecutors hell.

“I have not yet begun to fight,” he told reporters outside the courthouse.

We’ll see just how much fight he has left now.