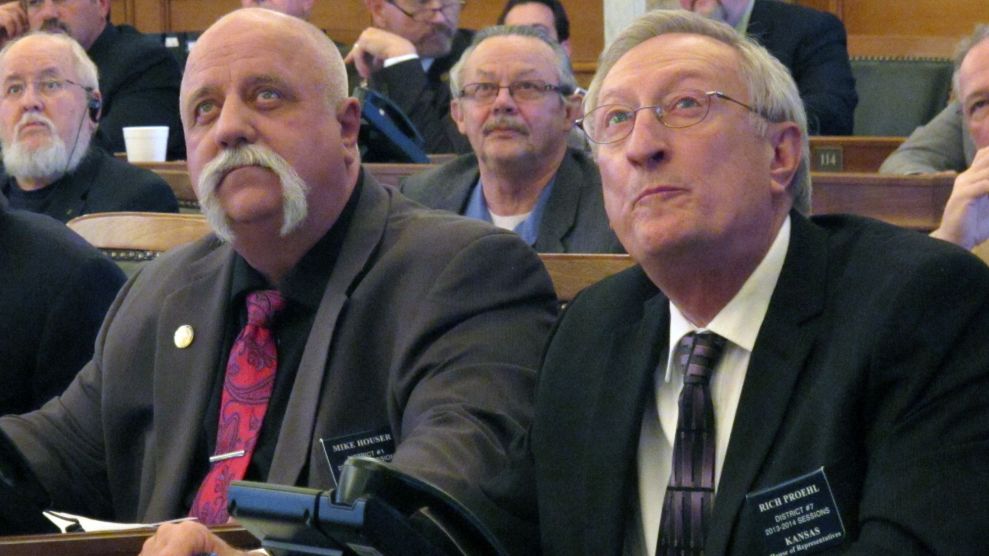 An anti-vaccine Kansas Republican, sick with an undisclosed illness, was so dedicated to overriding a Democratic governor’s veto of a gerrymandered congressional map that he reportedly showed up to the statehouse for the first time in the legislative session and cast his “yes” vote while hooked to an oxygen tank.

Rep. Michael Houser’s vote came amid a frantic effort by Kansas Republicans to reach the required two-thirds majority necessary to override Gov. Laura Kelly’s veto of the so-called “ad astra” map. The map is similar to many that have passed Republican-dominated state legislatures over the last few months. It deploys elaborate and creative methods to dilute the power of Democrat-leaning voters. In particular, Kansas’s map seems designed to weaken the position of U.S. Rep. Sharice Davids, Kansas’ sole congressional Democrat. Republicans have embarked on a desperate—and, ultimately, successful—legislative gambit to get it passed—at one point even pausing the vote so that the leadership could sway holdouts.

In the end, the gerrymandered map was enacted in a 85-37 vote, one more yes vote than was necessary to override the veto.

Before being sent to the Kansas House, the bill faced similar difficulties in the state Senate, with Republicans initially failing to marshal enough votes to override Gov. Kelly’s veto. The bill finally reached the required threshold after Senate Republicans cut a deal with Sen. Mark Steffen, an anesthesiologist under investigation by the state’s medical board for allegedly spreading Covid misinformation. Steffen reportedly reversed his initial “no” vote in exchange for the advancement of measures weakening vaccine requirements in schools and a bill shielding doctors who prescribe unproven Covid treatments like ivermectin from investigation.

However, all these Republican “efforts” could still be for nought: The map is almost certain to face legal challenges that could bring it before the seven justices on the Kansas Supreme Court, five of whom were appointed by Democratic governors.