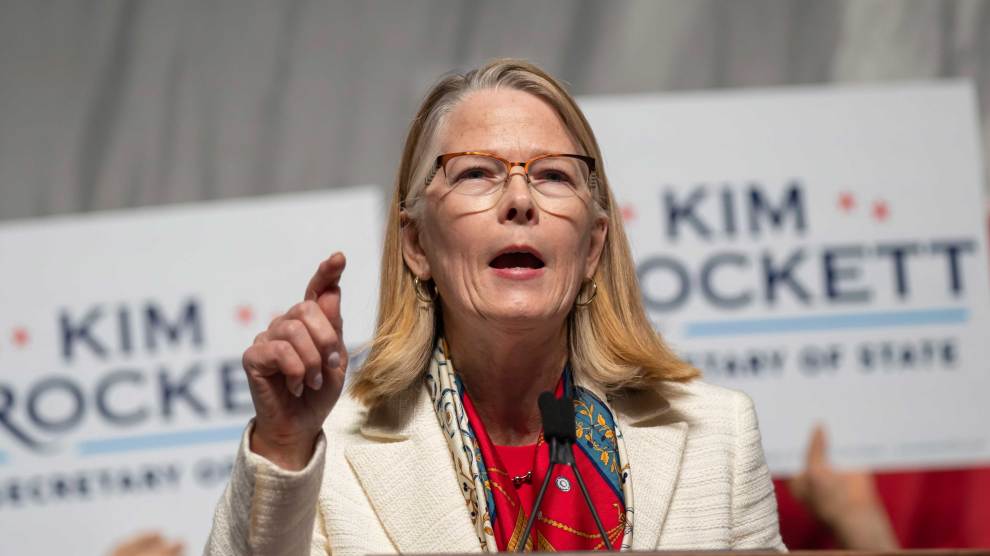 Kim Crockett speaks during the first day of the Minnesota State Republican Convention on May 13, 2022.Glen Stubbe/AP

Kim Crockett, the leading Republican candidate for Minnesota’s Secretary of State, questioned in 2020 whether people who are disabled should be able get assistance to vote.

That year, the Minnesota Supreme Court upheld a law allowing individuals to help people with disabilities or difficulty reading English when they’re filling out ballots. In a radio interview shortly after the ruling, Crockett said, “So, the Minnesota Supreme Court ruled that indeed you can help an unlimited number of people vote if they are disabled or can’t read or speak English, which raises the question: Um, should they be voting? We can talk about that another time.”

GOP candidate for Minnesota secretary of state Kim Crockett, who would be the state’s chief election officer, says that people requiring assistance because they do not speak English or are disabled “raises the question: Should they be voting?” pic.twitter.com/hoCKBBXq1e

On Twitter, Crockett adamantly disputed HuffPo’s conclusions, saying that she “has NEVER stated or implied that disabled or non-English speaking citizens’ right to vote should be questioned.”

Crockett has the endorsement of the state’s Republican Party in her run for secretary of state, the official in charge of election oversight. If she wins Tuesday’s primary, she will take on Minnesota’s Democratic incumbent Steve Simon in the general election.

As HuffPo notes, this isn’t the only time Crockett has made bigoted remarks. She made headlines in 2019 when, as the head of a right-wing think tank, she spoke to the New York Times about Somali resettlement efforts in Minnesota. “I think of America, the great assimilator, as a rubber band, but with this—we’re at the breaking point,” Crockett told the Times. “These aren’t people coming from Norway, let’s put it that way. These people are very visible.”

Earlier this year, at the state’s Republican convention, Crockett played an anti-Semitic campaign video depicting George Soros, the Jewish billionaire and frequent donor to liberal causes, as a puppet master controlling Simon, who is Jewish.

Crockett is among a number of GOP-endorsed promoters of the Big Lie—the claim that the 2020 election was stolen—who are running for secretary of state positions in swing states across the country. These individuals, including Nevada’s Jim Merchant, Arizona’s Mark Finchem, and Michigan’s Kristina Karamo, could play pivotal roles in determining the outcome of the next election. All three have been endorsed by the ultimate Big Lie champion and likely 2024 candidate, Donald Trump.

adminhttps://australianinternetmarketing.com
Previous articleInternet site Marketing and advertising Recommendations They Don’t Want You To Learn!
Next articlePrinciples: Life and Work

“Don’t Worry Darling” Would Be Better Without Harry Styles

Searching For Ideas About Web Page Hosting? View The Information Below!