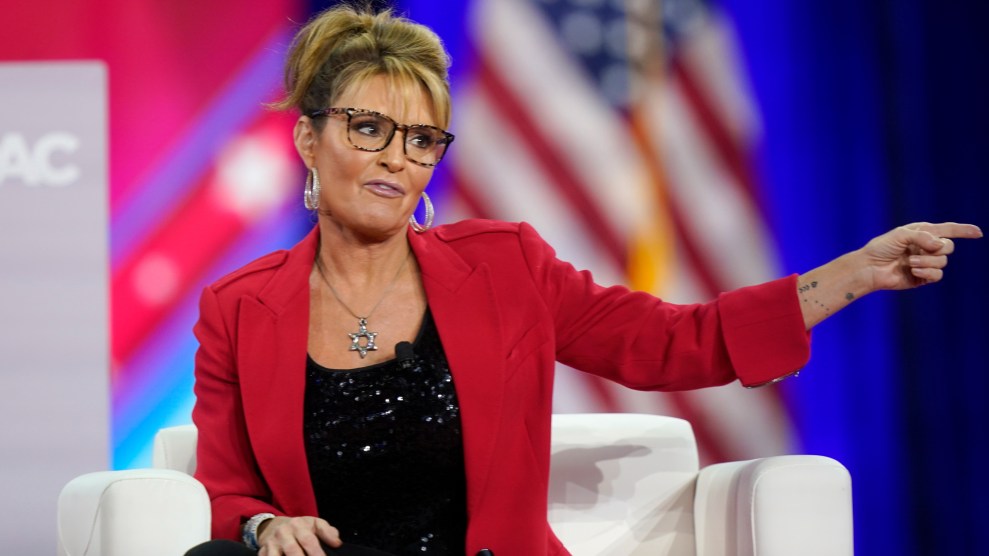 While her opponents were campaigning in Alaska, Palin was taking center stage in Dallas.LM Otero/ AP

Decked out in sequins, a GOP-red blazer, and a necklace with a star of David that led some observers to wonder if she had converted to Judaism, former Alaska governor, former vice presidential candidate, and a current GOP congressional candidate for Congress, Sarah Palin took the stage at CPAC-Texas last Thursday. “She’s Back! An Interview with Sarah Palin,” was going to focus on her return to politics after well over a decade.

Interview host and CPAC vice-chair Charlie Gerow introduced her as “one of the leaders in the conservative movement” before they embarked on a twenty-minute conversation that included plenty of misinformation about the integrity of American elections. Palin and Gerow hit many of the cherished Republican talking points that attempt to undermine faith in the electoral process including Dominion voting machines, mail-in ballots, and ranked-choice voting.

This year, Alaska instituted ranked-choice voting for its primary in order to select which candidates will be running this fall to fill the state’s only congressional seat. When they go to the ballot box, Alaskans will rank their top three candidates to represent them in Congress. If no one gets more than 50 percent of the vote, the person with the fewest votes is eliminated and the ballots for that candidate are redistributed. Palin lamented the whole idea of ranked-choice voting, often repeating that Alaska is the first state to offer this option. “It’s bizarre, it’s convoluted, it’s confusing and it results in voter suppression,” Palin told the CPAC crowd. “It results in a lack of voter enthusiasm because it’s so weird.”

None of that is true. Maine has been doing ranked-choice voting since 2016 and several cities and municipalities around the country have also adopted the system. “There isn’t a higher rate of incomplete or spoiled ballots in ranked choice races compared to ballots in elections using plurality voting,” Amy Fried, a professor of political science at the University of Maine, told Mother Jones. “Nor is turnout lower.” Rick Pildes a constitutional law professor at the NYU School of Law noted, “There’s no evidence voters have been confused or don’t understand how to rank candidates one, two, three.”

Proponents of ranked-choice voting say the system filters out some of the most extreme candidates on the left and right because, by ranking preferences, voters end up building a consensus rather than picking just one Democrat over one Republican. Last month, former President Donald Trump held a rally in Anchorage. “You never know who won in ranked choice. You could be in third place and they announce that you won the election,” he said. “It’s a total rigged deal. Just like a lot of other things in this country.”

One reason that Trump and Palin might be inclined to sow doubt about a ranked-choice voting system is that the losers would likely be extremist MAGA candidates. “It doesn’t matter if you win by getting the most votes,” Palin told her CPAC audience. “It matters if you have more second or third place votes depending on how the voters are ranking you.” That may be the case for a candidate who gets the majority of first-place votes, with 51 percent or more. But this is not likely to be a problem for Palin since a recent poll showed her in third place, trailing Republican Nick Begich III, a software executive from an Alaska political dynasty who has the endorsement of the state Republican party, and former Alaska house legislator and Alaska Native, Democrat Mary Peltola.

Palin then attempted to discredit other features of Alaska’s electoral system, and in effect the norms in other states. “We have mail-in only ballots now,” she said. “We have the Dominion computerized system—no hand counting, it’s gotta go all through this computer system.”

There is a lot of misinformation to unpack in those two sentences. Let’s start with her reference to Dominion Voting Systems, which manufactures vote-counting machines. After the 2020 elections, Trump lawyers Sidney Powell and Rudy Giuliani claimed without any evidence that Dominion voting software was switching votes for Trump to Biden. Repeatedly this assertion has been proven false. An investigation through the Department of Homeland security found no evidence that the computers were exploited to breach or alter election results. Dominion has active defamation lawsuits against Powell, Giuliani, and others who have spread the false claims. When it comes to paper ballots, according to the Alaska Division of Elections, the state uses ones that go through a scanner. Plus, the state reports there are 131 precincts, predominantly rural and Alaska Native communities, that use hand counting. So not only is Palin wrong, she’s ignoring some of her most vulnerable voters.

When Alaskans vote next week and again in November, they will have the option of going to their polling places, a local school, for instance, or tribal hall, or church, and casting their vote in person and on paper. It is true that voting by mail was the only option in the June special election primary after the congressional seat was vacated by Rep. Don Young’s death. “And I won that handily,” Palin bragged. “I got more votes than anyone else.”

Just five days after her CPAC Texas appearance, Palin was back on the campaign trail holding a tele-rally with Donald Trump. “Another day in paradise. This is a strange day. You probably all read about it,” Trump told Palin supporters hours after his Mar-a-Lago home was raided by the FBI. He quickly pivoted to deriding the new voting system and railing against three-term moderate Republican incumbent Sen. Lisa Murkowski. Trump told Palin voters to “pick only one” candidate on the ballot next week—a move that the Alaska GOP worries will split the Republican vote in favor of Democrat Mary Peltola. August’s election is just to fill the remaining months of Don Young’s term (all three candidates have filed to run for the November general election).

Palin then returned to the Trump-as-victim-trope that follows him everywhere. “He has to witness and take that injustice that so many of us are so angry about all around him, especially today,” the former governor said. “And yet, look at what he’s doing, you guys, he’s spending the time with us, with Alaskans, and we love him for that.”

adminhttps://australianinternetmarketing.com
Previous articleHave The Edge Against Your Competitors With This Particular Guidance On Online Marketing
Next articleKenya elections 2022: Raila Odinga and William Ruto in tight race for president

The Best Recommendation About Web Site Design Will Be Here

How To Be A Foreign Exchange Expert In No Time