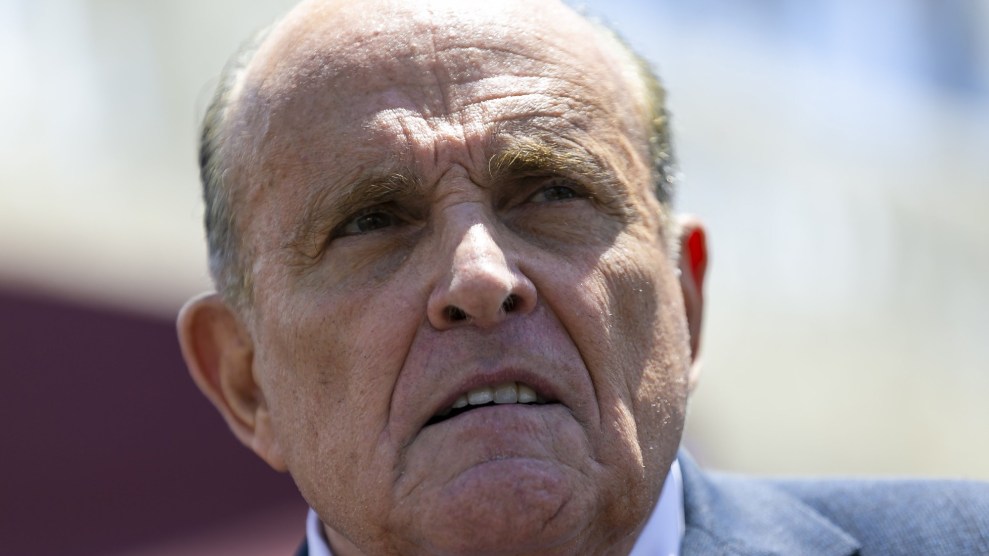 A district attorney in Georgia has informed Rudy Giuliani that he is a target of a criminal investigation into efforts by former President Donald Trump and his allies to improperly influence the counting of votes in the state, Giuliani’s lawyer said.

The attorney, Robert Costello, also said Giuliani will obey a Fulton County judge’s order to appear Wednesday before a special grand jury convened for the probe. But Costello told Mother Jones the former New York mayor plans to invoke attorney-client privilege and decline to answer questions about his dealings with Trump, who was his client at the time.

Fani Willis, the district attorney in Fulton County, which includes most of Atlanta, has indicated that the probe could result in multiple defendants facing charges of conspiracy to commit election fraud and racketeering over their effort to use so-called fake alternate electors to overturn Trump’s defeat there. (Willis is also looking into Trump’s infamous phone call to Georgia Secretary of State Brad Raffensperger asking him to “find” enough votes to reverse his defeat there.)

Giuliani’s status as a target means Trump is or will soon be in a similar position, Norm Eisen, a lawyer who worked for the House Judiciary Committee during Trump’s first impeachment, told the New York Times. “There is no way Giuliani is a target of the D.A.’s investigation and Trump does not end up as one,” Eisen said. “They are simply too entangled factually and legally in the attempt to use fake electors and other means to overturn the Georgia election results.”

Costello noted Monday that Fulton Country prosecutors had indicated in court papers filed on around July 10 that they considered Giuliani a material witness, not a target, in their investigation. Costello suggested this showed the prosecutors have made contradictory statements. But it could just easily suggest that the investigation has advanced over the last month.

Giuliani also faces scrutiny over false statements about election fraud that he made in testimony before state legislative committees in December 2020. A New York appellate court cited those bogus claims extensively in a decision last year disbarring Giuliani in New York.

A federal judge on Monday also denied South Carolina Sen. Lindsey Graham’s request to avoid having testifying before the Fulton County grand jury as a witness. Graham made two phone calls to Raffensperger after the 2020 election asking about ways to help Trump by  discarding mail-in ballots. Graham is scheduled to testify on August 23.

adminhttps://australianinternetmarketing.com
Previous articleAn Incredible Internet site Is One Thing, But They Are You Advertising and marketing It Appropriate?
Next articleUkraine war: Explosions rock Russian base in Ukraine’s Crimea

Don’t Go Into Web Page Hosting Without Learning These Pointers