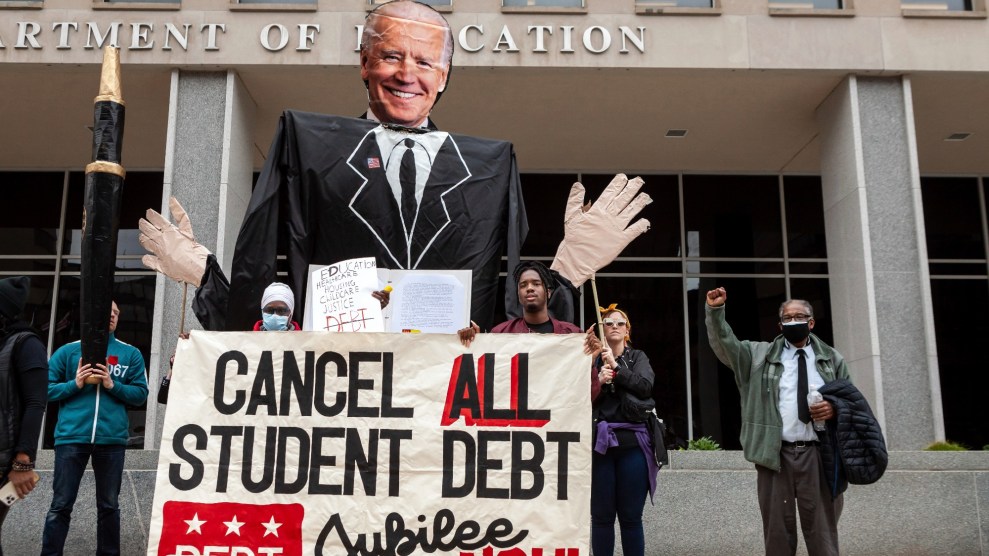 Protestors outside the Education Department in April called on Joe Biden to cancel student debt.Allison Bailey/AP

In a letter sent to the president on Wednesday, nearly half of American governors—all Republican—voiced their opposition to Biden’s student loan forgiveness plan, announced last month.

“We fundamentally oppose your plan to force American taxpayers to pay off the student loan debt of an elite few,” they write in the letter.

The main argument is that Biden’s student debt forgiveness will harm lower-income families by forcing their hard-earned dollars to go to repaying the debts of America’s wealthiest, including high-salary lawyers and doctors who hold debt from graduate degrees.

“The top 20 percent of earning households hold $3 in student debt for every $1 held by the bottom quintile, generating a lopsided reality where the wealthy benefit at the expense of the working,” the governors write in their letter. “Simply put, your plan rewards the rich and punishes the poor.”

First, the plan will reserve higher levels of forgiveness for students who come from low-income backgrounds. Biden’s order will forgive $10,000 of federal student loans for all borrowers, but up to $20,000 for students who took out Pell Grants for college. Pell Grant recipients, by definition, only qualify for those grants if they are from the lowest-income families.

Additionally, the wealthiest Americans won’t qualify for debt forgiveness because they earn too much money. Biden’s plan is restricted to borrowers who earn at most $125,000 annually. That salary is far below the pay for most doctors, corporate lawyers, or MBA-wielding bankers or consultants.

These controls are a key reason why about 90 percent of the debt relief from Biden’s plan will go to people making less than $75,000 a year. That is a far cry from the “elite few” that America’s Republican governors claim Biden is enriching with the hard-earned dollars of middle-class workers.

Towards the end of their letter, the governors also question whether Biden has the authority to unilaterally forgive debt through executive order. The administration’s Office of Legal Counsel and the Department of Education both issued opinions last month in support of Biden’s authority to move ahead on canceling student debt. But the governors’ point previews the reasoning that is likely to arise in legal challenges to Biden’s debt forgiveness plan—once Republican-backed groups figure out how, exactly, to go after it in court.

The governors also criticize Biden for working toward debt cancellation without addressing the root causes of America’s ballooning student loan crisis: interest on student loans that make them even harder to pay down, as well as astronomical college tuition rates. On this, they’re right. College tuitions are at record highs, and interest on student debt is set to be turned back on at the end of the year, after a nearly three-year pandemic pause—with no plan for how to prevent the student debt crisis from refueling itself in a matter of years.

adminhttps://australianinternetmarketing.com
Previous articleIntelligent Affiliate Marketing Strategies For Your Business
Next articleTechniques For Success By Marketing Your Content