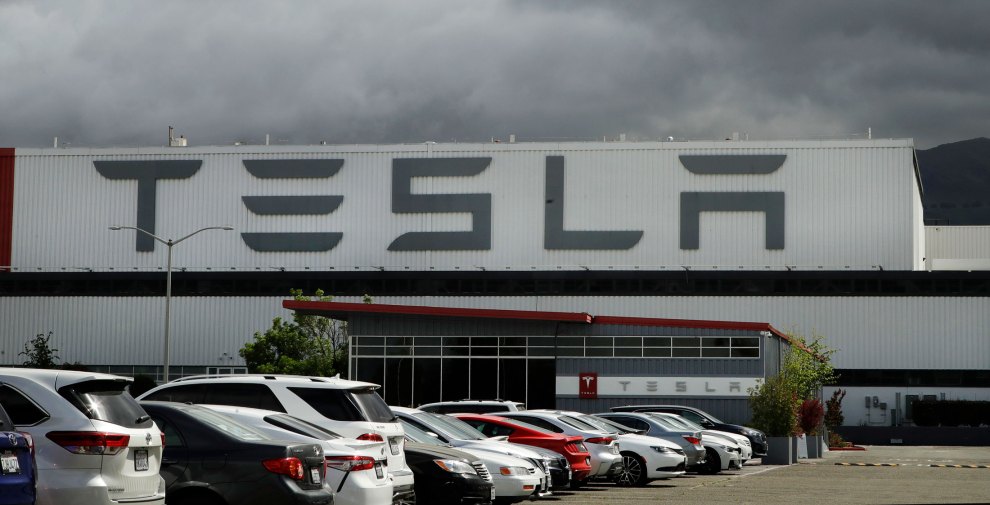 Vehicles are parked outside the Tesla plant, in Fremont, Calif., on May 12, 2020. California sued Tesla Inc. on Wednesday, Feb. 9, 2022, over allegations of discrimination and harassment of Black employees at its San Francisco Bay area factory. Ben Margot/AP

They heard racial slurs from their fellow workers and supervisors. They saw racist graffiti on the walls. They spoke up but their voices were unheard. The factory in Fremont, California, where they worked, was nicknamed “the plantation.” This was the life of a Black worker at Tesla’s main factory in the San Francisco Bay Area, according to a new civil rights lawsuit filed by California’s Department of Fair Employment and Housing.

On Thursday, the state agency that examines civil rights complaints filed a lawsuit against Elon Musk’s multi-billion dollar electric car company, alleging that the company failed to appropriately respond to complaints by Black workers who faced a barrage of racist abuse and workplace segregation.

In the suit, the details of which became public on Friday, California attorneys characterized Tesla, a company whose jobs have long been seen as a “golden ticket” to stability and whose ethos is defined by its pursuit of a more socially conscious future, as a place “that profits from an army of production workers, many of whom are people of color, working under egregious conditions.” They claimed that Tesla “failed to take effective remedial measures in response to complaints of discrimination and harassment,” noting that workers were discouraged from complaining and that they could face “retaliatory harassment, undesirable assignments, and/or termination.”

The lawsuit follows a three-year investigation by the California agency and numerous other lawsuits filed against Tesla by former workers in the Fremont plant—in October 2021, a federal judge ordered Tesla to pay $137 million to Owen Diaz, a Black Fremont factory contractor who faced racist abuse by his supervisor and others and who accused the company of failing to address the abuse.

The new suit focuses on the sprawling Fremont factory, where the company’s electric cars were originally produced, and is a disturbing window into life as a Black factory worker at Tesla. According to the complaint, 20 percent of assembly line workers are Black, yet the executive suite lacks any Black representation. What’s more, Black workers are not only overrepresented among Tesla’s lower-level workers, they are also severely underrepresented among the very managers and senior officials who would be tasked with addressing complaints of racism. The alleged racism is shocking:

In a company blog post, Tesla, noting it opposed all forms of discrimination and harassment, described the state’s lawsuit as “unfair and counterproductive” and pointed out that the lawsuit focused on accusations raised at its Fremont factory between 2015 and 2019, suggesting the issues had been resolved. The company claimed that the California agency “has never once raised any concern about current workplace practices at Tesla.” (In the lawsuit, California attorneys argue that contrary to the company’s claims, the Department of Fair Employment and Housing and Tesla’s workers have repeatedly complained about racial harassment and discrimination for years, noting “complaints were filed as recently as 2022.”) A day after state officials filed the lawsuit to Alameda Superior Court, Elon Musk tweeted:

You can read the lawsuit here. Even with the racial slurs peppered throughout the complaint, perhaps the most damning piece is how familiar and systemic they are—how Black workers were baited into confrontations and seen as “aggressive,” how Black workers were denied promotions and disproportionately faced disciplinary action and relegation compared to their peers, how Tesla allegedly failed to listen to Black workers’ complaints over the years and instead retaliated against those who spoke up.

Here are the most horrific allegations:

Throughout the day, every day, Black and/or African American workers heard Defendants’ workers, leads, supervisors, and managers make racial slurs and comments about Black workers. Examples of the racist language include the n-word, “porch monkey,” “monkey toes,” “boy,” “hood rats,” and “horse hair.” Defendants’ workers, including production leads and supervisors, made references to Black and/or African Americans in racist comments and racist jokes such as “N[ ] word out of the hood,” “from the ghetto,” “Tesla [was] hiring lazy coons,” and “go back to Africa.”

Racist inscriptions on the factory walls

On a daily basis, Black and/or African American workers were confronted with racist writing while working at Tesla. They saw racist graffiti – including “N[ ],” “KKK,” swastikas, the Confederate flag, a white supremacist skull, “go back to Africa,” and “mayate” – written on the restroom walls, restroom stalls, lockers, workplace benches, workstations, lunch tables, and the break room. These slurs were even etched onto Defendants’ machinery. One Black worker observed “hang N[ ]” penned next to a drawing of a noose in the breakroom restroom. This worker also saw “all monkeys work outside” and “fuck N[ ]” on the breakroom walls. These racial slurs and racial comments, apparent to all who walked by, were left up for months, without Defendants bothering to remove them.

Black and/or African American workers reported being assigned to the most physically demanding posts in the Tesla factories, compared to non-Black workers who were given more technical, less physical jobs. One worker witnessed only Black and/or African American workers cleaning the factory floor on their hands and knees. No other groups of workers had to do the same. Another worker heard Defendants’ workers complain about the heavy workload and how they “need[ed] to get some [B]lacks on this line,” suggesting that Black and/or African American workers can and should be doing the difficult menial jobs. One Black worker started as a production lead when he came through a staffing agency, but after he introduced himself to his white manager, he was demoted on the same day to a production associate. His supervisor told him that Defendants’ manager thought he was “better suited” in the more labor-intensive position. This worker also applied for a transfer to Tesla’s Lathrop factory, only to be told by his manager not to “get [his] hopes up.” However, a white co-worker was granted the same transfer.

Retaliation for speaking up

Management retaliated against Black and/or African American workers for complaining. Complainants were denied bonuses, promotions, and other professional opportunities. They were falsely accused of being late, unjustifiably written up, denied transfers, assigned to physically strenuous posts or undesirable locations, constructively discharged, or terminated. For those who needed a reasonable accommodation, their requests for a reasonable accommodation were denied in retaliation. As a consequence, many Black and/or African American workers aggravated their injuries or disabilities.

Not surprisingly, Defendants ignored, immediately dismissed, or perfunctorily investigated and then dismissed workers’ complaints. Investigations were inconsistently completed, with different investigators asking vastly varying questions, with different levels of detail and analysis, and sometimes coming to opposite conclusions. Investigations took months to complete. For example, an investigation of a race complaint, where only one witness was interviewed, took close to six (6) months to complete. human resources staff were also not well-trained in analyzing race complaints. For example, one human resources investigator concluded that “banana boy” was simply a “nickname,” not a racial slur, even though the Black complainant perceived it to be racist and the harasser had been coached previously on his condescending communication style. In another case, Defendants’ human resources investigators determined that a claim of harassment was unsubstantiated because there was no witness corroboration, even though the harasser had admitted to saying a racial slur. Workers, whom Defendants concluded had indeed harassed Black workers and were previously disciplined for similar offenses, remained employed and even were promoted because they were “good performers.”

In some cases, human resources staff gave advance notice of the race complaints to the alleged harassers before the investigation began. One Black worker stated that immediately after she complained about race harassment, human resources official texted her harasser, who was also her supervisor, about her complaint against him. The supervisor then retaliated against the Black worker, accosting her, writing her up, and then calling security on her for being purportedly “belligerent.” Even after Black and/or African American workers were transferred to a different area, retaliation by management still persisted because management had the ability to simply walk over to the new post and harass the complainants.

Los Angeles Water District Is Forcing Its Celebrities to Conserve

Bitcoin’s Climate Impact Is Worse Than We Thought

Lawns Are Water Hogs, But Think Before You Rip Yours Out

Website Creation Is A Snap By Using These Techniques

Know These Ideas If You Are Constructing A Website!