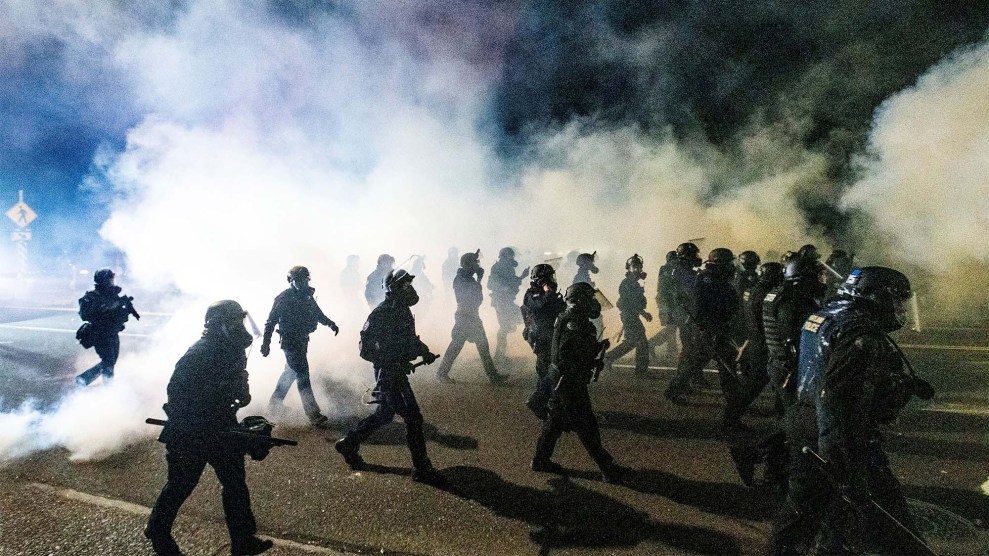 Portland, Oregon’s mayor announced just before the weekend that the city’s police department is investigating itself over a training presentation featuring a meme encouraging cops to use violence against left-wing protesters.

The meme shows an officer in riot gear beating a protester described as a “dirty hippy.” The message, addressed to demonstrators in the form of mock Bible verses, suggests officers would “christen your heads with hickory, And anoint your faces with pepper spray.”

“And once thou hast been cuffed and stuffed; Once though hast been stitched and bandaged,” it continued, “Perhaps thou shall learn, I’m tired of your shit. Amen.”

The department said it began looking into the training presentation in September after the image was discovered during a legal review. But it wasn’t until late on Friday that Mayor Ted Wheeler’s office alerted the public and published the presentation, noting that it would soon be released in the course of a lawsuit over the city’s response to racial justice protests in the summer of 2020.

The mayor condemned the meme. “I am disgusted that this offensive content was added to a training presentation for our police officers,” Wheeler said in a statement on Friday. Chief Chuck Lovell insisted the violent message was “not representative of the Portland Police Bureau, and it is disappointing to all of us who work so hard to earn the community’s trust.”

The presentation appeared to have been created in 2018 as part of an effort to train officers who would work protests in the famously liberal city. Wheeler’s office said it was unclear who had included the meme, which concluded the slideshow, or whether it was displayed during formal trainings. But Portland police have a lengthy history of violent confrontations with demonstrators. In  2020, amid nationwide protests following the murder of George Floyd by a Minneapolis police officer, Portland cops used weapons against civilians more than 2,500 times, according to an analysis by data scientist Samuel Sinyangwe and other researchers. They found the department used more less-lethal force per arrest than 96 percent of the departments they analyzed.

After several months of protests, in which some demonstrators smashed windows and burnt property, Mayor Wheeler announced a crackdown in 2021. He said it was time to “unmask” those who engaged in vandalism, and to “hurt them a little bit.” The city has been sued multiple times over the police’s use of tear gas and excessive force against racial justice demonstrators. It recently agreed to a $100,000 settlement with a protester who alleged that officers sprayed him in the face and threw him to the ground after he refused to put down a sign in 2020.

Teressa Raiford, who leads an activist group called Don’t Shoot Portland, told the New York Times that the police department’s violent training meme did not surprise her, based on what she’s witnessed at protests: “I’ve seen it. I’ve felt it. I’ve experienced it.”