No. Ted Cruz Was Not Right About Russia’s Ukraine Invasion. 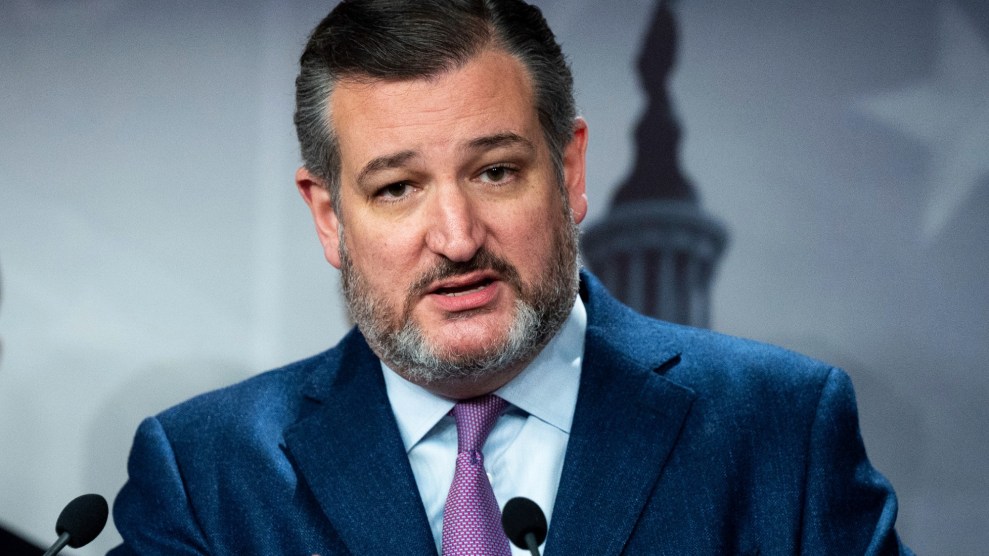 Sen. Ted Cruz, who hopes one day to be president, would like Americans to believe that his policies could have saved Ukraine, if Democrats weren’t such weenies.

Since 2019, the Texas Republican has been a champion of sanctioning the Nord Stream 2 pipeline, which was designed to transport gas from Russia to Germany under the Baltic Sea—thereby bypassing Ukraine, which derived revenue from Russia gas passing through its borders. American opposition to the pipeline has relied on the argument that Russia could use the pipeline to increase its leverage over Western Europe, a notion promoted by lobbyists for Ukraine.

In an interview this week with New York magazine, Cruz, while extolling himself, attacked President Joe Biden’s decision last year to suspend previously enacted sanctions on the pipeline:

“That decision was the direct cause of the Russian invasion of Ukraine,” Cruz said in an interview this week in his Senate office. “And when Biden waived sanctions on Nord Stream 2, I said at the time, ‘The consequences of this, if the Biden administration allows Nord Stream 2 to be completed, will be a Russian invasion of Ukraine, will be Russian tanks in the streets of Kyiv.’ I wish that prediction had not proven accurate, but it has proven precisely accurate.”

In January, legislation that Cruz sponsored to restore sanctions on Nord Stream 2 fell short of the 60 votes it needed to advance. Cruz is suggesting here that, had the Senate passed his bill, that result would have somehow deterred Russian President Vladimir Putin from invading.

That is just unmitigated horseshit. When Russia amassed troops on Ukraine’s border, Biden threatened to reimpose the sanctions: “If Russia invades,” he said, “then there will be longer Nord Stream 2. We will bring an end to it.” To emphasize his seriousness, Biden secured backing from German Chancellor Olaf Scholz. (Pleas by Germany for the US not to meddle in its sovereign affairs by messing with the country’s energy policy, were, indeed, the reason Biden suspended sanctions last year.)

Scholz was with Biden when he spoke. Putin knew his invasion would cost him the pipeline. He did it anyway, and the United States and Germany made good on their promise. Since the threat of losing Nord Stream 2 didn’t dissuade Putin, it is not clear how keeping the sanctions in place would have restrained him. All evidence suggests he would have attacked anyway.

Cruz didn’t bother trying to explain his reasoning. Like other Republican senators, who enabled Donald Trump’s unctuous posture toward Putin, and who voted against impeaching Trump for withholding US aide to Ukraine in order to blackmail Volodymyr Zelenskyy, Cruz has now pivoted to accusing Biden of appeasing Putin. His argument relies less on logic than on the prevailing hawkishness in Washington, and the popular (but mostly unexamined) assumption that the invasion proves US policy toward Russia should have been tougher and more punitive. “It is a defeatist attitude that got us in this mess to begin with,” Cruz declared, without further explanation.

It is not surprising that Cruz would say such a thing. It is, perhaps, a bit surprising that New York would publish an article that reads like a Ted Cruz press release, with zero apparent pushback, under the headline: “Was Ted Cruz Right About Russia? He spent years fighting Putin’s prized pipeline.” Cruz after all, is an ambitious guy, with a track record that suggests it is risky to take his assertions at face value.

One of the ways Cruz fought Putin’s pipeline, the New York article notes, was that he “single-handedly blocked scores of Biden’s nominees from receiving floor votes to force them to reimpose sanctions on Nord Stream 2’s owner.” The nominees he blocked, leaving their positions unfilled, included dozens of contenders for top State Department jobs. Might it be the case that better diplomacy, which Cruz’s holds obstructed, could have helped head off Russia’s invasion? That’s debatable, but it’s a more compelling argument than his claim that Russia invaded because the US suspended the Nord Stream sanctions.

Why did Cruz take lead in opposing Nord Stream? It may be relevant that a leading lobbyist advocating sanctions on the pipeline, Daniel Vajdich, who represents the Ukrainian Federation of Employers of the Oil and Gas Industry, used to work for him. In addition, Cruz and Sen. John Cornyn, a fellow Republican cosponsor of his sanctions bill, represent Texas, the nation’s largest producer of liquified natural gas. Without Nord Stream 2, Germany and other European states might buy more Texas gas.

“I’m not even sure he really cares about Ukraine,” Daniel Fried, who worked as the State Department coordinator for sanctions policy under President Obama, told the American Prospect in December. “It’s just politics.”