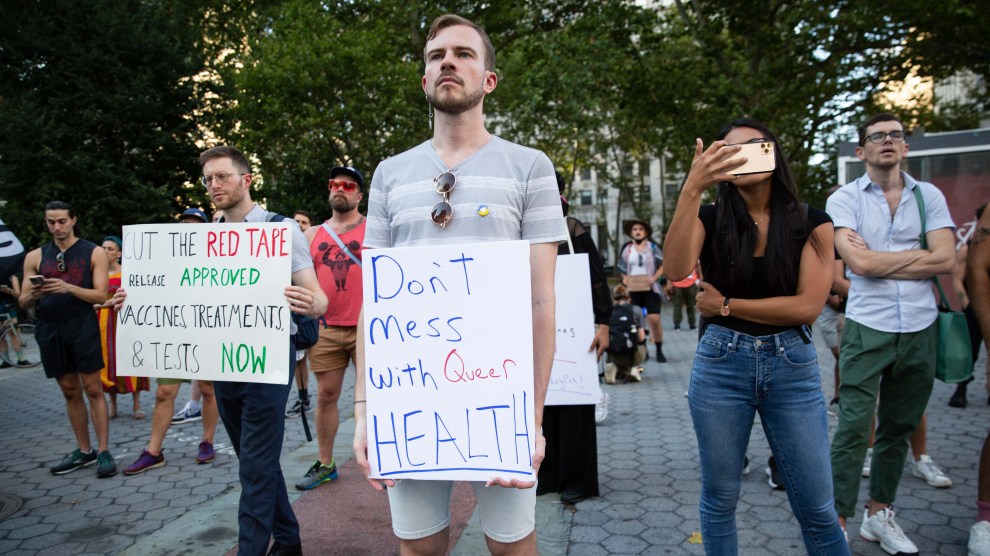 Protesters in New York demand a stronger response to the monkeypox outbreak.Karla Cot/SOPA/Zuma

New York Gov. Kathy Hochul has declared a state disaster emergency over the monkeypox outbreak, a move she says will enable the state to ramp up its vaccine distribution as case counts grow.

New York currently has the most recorded monkeypox cases of any state, accounting for more than a quarter of the 5,189 cases nationwide. Hochul’s emergency declaration will allow a greater number of health professionals to administer the vaccine, according to the New York Times, and it directs state agencies to help local governments respond to the virus. In California, which has the second-largest number of infections, the city of San Francisco also recently declared a state of emergency.

As my colleague Jackie Flynn Mogensen reported earlier this month, the United States’ response to the monkeypox outbreak has suffered from vaccine shortages, limited testing availability, and a lot of red tape preventing doctors from prescribing antivirals. In other words, it’s sort of like the Covid-19 response all over again—and monkeypox, having been discovered in 1958, isn’t even a novel disease.

Thankfully, hospitalizations and deaths from the current monkeypox outbreak are rare. While officials ramp up vaccine production and testing, officials at the World Health Organization are recommending that people limit their number of sex partners—a 2022 version of flattening the curve.