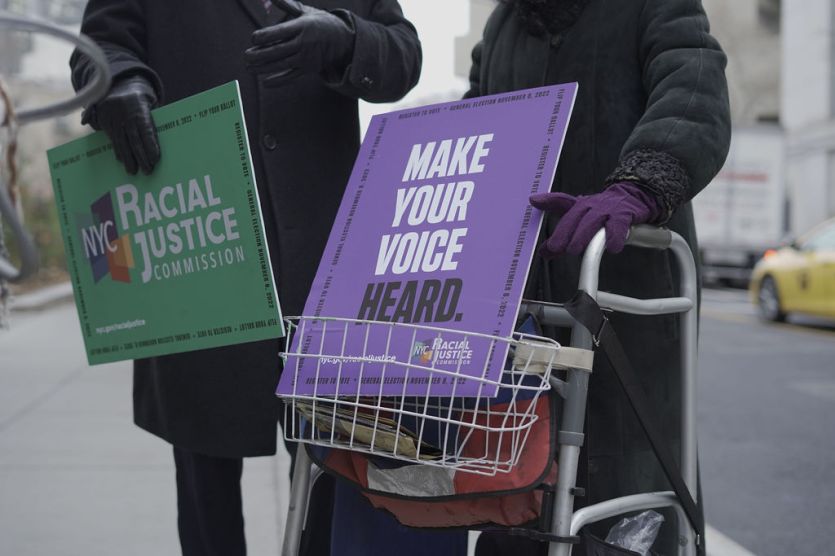 The Racial Justice Commission gathered outside the Office of the City Clerk on December 28, 2021.Photo by Jermaine Clark

In the final days of former mayor Bill de Blasio’s administration, he honored a pledge made in his 2021 State of the City address: the creation of a commission to revise the city’s governing charter through amendments, in the form of ballot measures, to “uncover and attack” institutional racism in New York City. On Tuesday, voters will decide whether or not to adopt them.

A response to the racial reckoning in the summer of 2020 over police brutality and to a pandemic that disproportionately impacted Black and brown New Yorkers, the New York City Racial Justice Commission was formally established in March 2021 as a first-of-its-kind group given a two-year mandate to “embed equity into the City’s planning, programming, and auditing processes.” The charter revision commission was assigned the mammoth task of proposing amendments to the municipal constitution that would begin the process of rooting out structural racism in the city’s government.

A product of more than a yearlong process, the ballot measures that will be in front of voters this week (who didn’t opt to vote early) were drafted after a review of the charter; meetings with experts and community leaders; and direct input from more than a thousand New Yorkers, according to the commission’s report.

“For me, the most moving moments were the testimonies of New Yorkers who struggle against a system that leaves so many behind,” Asian American Federation Executive Director Jo-Ann Yoo, a commission member, said in a press release. “Those stories will stay with me for a very long time.”

The first measure adds a statement of values to create the charter’s first preamble, guiding city government to “reimagine our foundations, structures, institutions, and laws” and remedy “past and continuing harms.” Some critics have said the measures amount to an insubstantial “empty gesture.” But, according to Darrick Hamilton, a highly regarded scholar on race and class, this trivializes the issue: “Perpetuity sets the benchmark for what we want as a city. Words have meaning, words have value, words not only set a precedent for a contemporary context but future contexts as well.”

The second measure is broader. It establishes a Racial Equity Office to create a standard for racial equity data collection and reporting; a biennial Racial Equity Plan which would require all city agencies to report short and long-term goals towards racial equity including current progress, set with data markers; and a Racial Equity Commission comprised of NYC residents, from impacted communities, to provide oversight.

And the third measure, perhaps the most consequential, would adopt a true cost of living metric. The idea is to focus on dignity rather than poverty, according to the commission, a guideline that disputes $15 an hour (which federal guidelines do not calculate as poverty-level wages) is enough to cover housing, healthcare, transportation, and childcare in the city. In making its case, the commission offers an example from a Salary Parity report by the Center for Public Affairs at the New School, noting that social service workers, the city’s “backbone,” would theoretically be able to use the true cost of living measure to bargain with city agencies for higher wages.

These ballot measures amount to a promise to study racial equity in one of the most diverse cities in the nation, with accurate and public metrics.

The commission’s voter education campaign started in late August after the second primary, an attempt to avoid voter confusion, according to City & State. But the late start has fueled conservative media and political groups who are known for attacking ballot measures late in the game.

Conservatives have argued that the measures push a “race-obsessed redistributive agenda” that looks to create equity (“a Marxist lie” according to Republican city council member Inna Vernikov). In a recent opinion piece, the New York Post called the measures “corrosive” and “potentially dangerous” equating them to the 2019 criminal justice reforms, which the author argues are driving the city’s crime wave, though the evidence shows no correlation between the two.

The Log Cabin Republicans of New York have tweeted their own interpretation of the ballot measures predicting dire outcomes including “radicals in the grievance industry” suing the city for damages and the Racial Equity Office “costing [New Yorkers] millions of tax dollars.” In a November 1 post, the Libertarian think tank Cato Institute, which is tracking ballot measures nationwide, characterized a City Journal article saying the measures were intended to “infuse racial considerations into city governance.”

Jennifer Jones Austin, CEO of the anti-poverty policy organization Federation of Protestant Welfare Agencies (FPWA) and Racial Justice Commission chair, has been promoting the ballot measures ahead of the election and pushing back against distorted claims and misinterpretations.

In a conversation with Mother Jones, she said that it’s difficult for detractors to say they’re against equal access and opportunity with a straight face, which is why they turn to fiscal alarmism. But “not one of the measures creates a private right to action and that there’s no possibility of people challenging the city,” she explains. Jones Austin also contests the argument over inflated taxes. “There have been studies done in recent years that demonstrate that by continually upholding inequitable structures and laws, America has actually lost more revenues in gross domestic product than they put out in terms of support.”

For Jones Austin, the value of Black and brown lives should be structurally embedded in the city’s laws–making the commission’s efforts, if passed, indelible. Since mayors change and mayoral executive orders can be undone by the next administration, she continues, “we can’t policy our way out of this.”

Past charter commissions have attempted reforms to the city’s democracy, such as the 2019 ballot measure to establish ranked-choice voting and the 2018 initiative to focus on campaign finance law and lower the cap on campaign contributions for all city candidates.

This commission is the first to take on what it sees as the complex task of tackling the pernicious racism embedded in New York’s institutions and to ask the electorate if racial equity should be a core government function. In New York, which has a history of redlining and wage theft affecting people of color, Jones Austin highlights the true cost of living measure as one example of what that could look like.

The measure would track the cost of living without considering public, private, or informal assistance, in hopes to combat wage deprivation and offer workers bargaining power.

It is a direct response to the ineffective Federal Poverty Guidelines, which as the report notes, says that a family of four in New York City is not in poverty at an income of $26,500 (which would barely cover a 1-bedroom in the Bronx, according to StreetEasy analysis from earlier this fall).

With a city in a housing crisis, particularly for low-income New Yorkers, accurate data is helpful, but hardly enough according to housing experts.

Barika Williams, the executive director of the Association of Neighborhood and Housing Development, agrees that the existing measures of poverty are a drastic underestimate (ANHD recently published research showing how the AMI misrepresents a typical household income in New York City).

“It’s always helpful to have the data about who we are as New Yorkers and what it takes to be able to live, survive, thrive,” Williams said in response to the true cost of living measure. But she says more will need to be done, “Is this going to create a new guide for how and what we build and for whom? Or is it another measure and metric that would be maybe less far off from the reality of New Yorkers, but that still doesn’t change the behavior of what we develop and build?”

While only three proposals will be on the back of November’s ballot, the commission has laid out a racial justice roadmap with recommendations and community input for further analysis and action. One recommendation that the commission did not have adequate time to take on, according to the report, is reparations.

“It’s not an absolute,” but according to Jones Austin, if the second ballot measure passes “the Racial Equity Office would require the mayor and city agencies to look at these issues and consideration of what that might look like in New York City could be something that they take up.