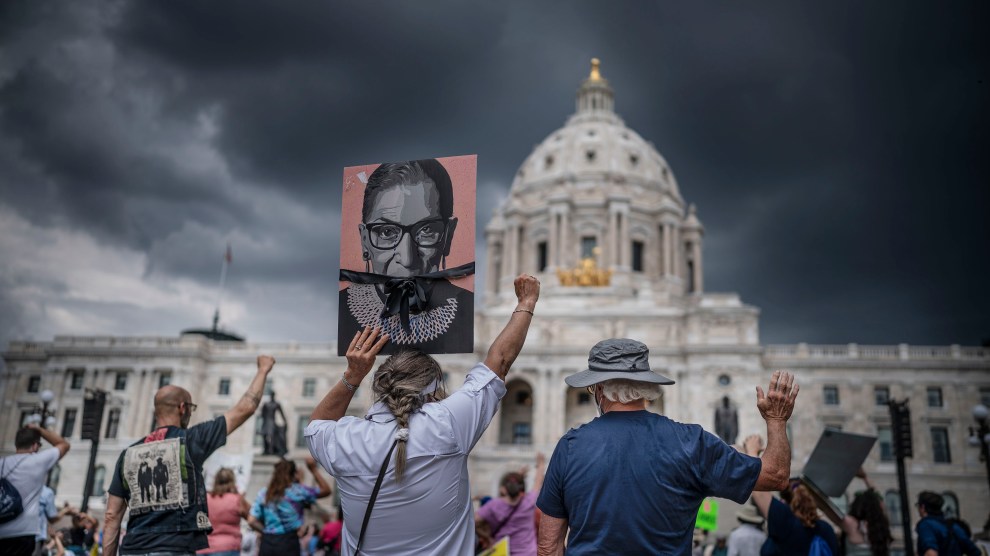 A poster of former Supreme Court Justice Ruth Bader Ginsburg at a rally for abortion rights at the capitol in St. Paul, Minnesota, in July

Earlier this year, Democrats were preparing to kiss their majority in the House goodbye. They only had a slim advantage over Republicans, just five seats. History shows the president’s party tends to do poorly in the midterms. But new polling suggests that maybe, just maybe, Democrats now have a path to hang on to the House—thanks in large part to women voters who are furious over the loss of constitutional protection for abortion rights.

With about 10 weeks until Election Day, Republicans are still in a position to claim a majority, but their lead in the polls has been shrinking. As of late August, CBS News’ Battleground Tracker, a survey of a nationally representative sample of more than 2,000 voters, estimates that the GOP would win win 226 seats today, down from an estimated 230 back in July. (The GOP needs 218 to flip the House.) Analysts said anger over abortion rights was driving the change in support, along with the recent downtrend in gas prices and growing opposition to former President Donald Trump, who faces mounting scrutiny for potentially criminal acts in connection with US national defense information that was stashed at his Mar-a-Lago estate.

Meanwhile, Democratic fundraising is improving, with an uptick in donations over the past few weeks. “Six months ago I think people were putting safe bets on a real blowout” in favor of Republicans, Rep. Elissa Slotkin (D-Mich.), told the Washington Post. A House Democratic strategist noted to the Post: “Now it is much more that the majority is in play. We have a path. It is there.”

The issue of abortion rights has enraged and energized the Democratic base, especially women, after the Supreme Court struck down Roe v. Wade in June. According to the CBS poll, twice as many likely voters said they would vote for members of Congress who supported abortion rights rather than for those who opposed them. The polling also found that the Democratic lead among white women with college degrees had increased by seven points since July.

Those gains in support are already playing out on the ground. In four special elections for House seats since the Supreme Court’s decision, Democrats have outperformed Biden’s 2020 votes. And earlier this month, Kansas voters defeated an anti-abortion ballot measure in an unexpected blowout.

Although the economy is still struggling, a recent drop in gas prices has in the meantime led some voters to look more favorably upon Biden: His job approval rating is the highest it has been among registered voters since February. And according to the CBS poll, Democrats are gaining support among independents who are displeased with Trump, not only amid the Mar-a-lago scandal, but following congressional hearings to investigate the January 6, 2021, attack on the US Capitol by a pro-Trump mob.

Republicans still retain a substantial lead among voters who care about inflation and the economy—always a key issue in elections—and again, the GOP only needs to flip four seats to win a majority. If the election were held today, Republicans would be well positioned to succeed, CBS analysts found, particularly after a series of Democratic retirements and a redistricting process favorable to the GOP. But it has become undeniable that the landmark overturning of Roe v. Wade just a couple of months ago set off a political earthquake that the GOP may live to regret in November.