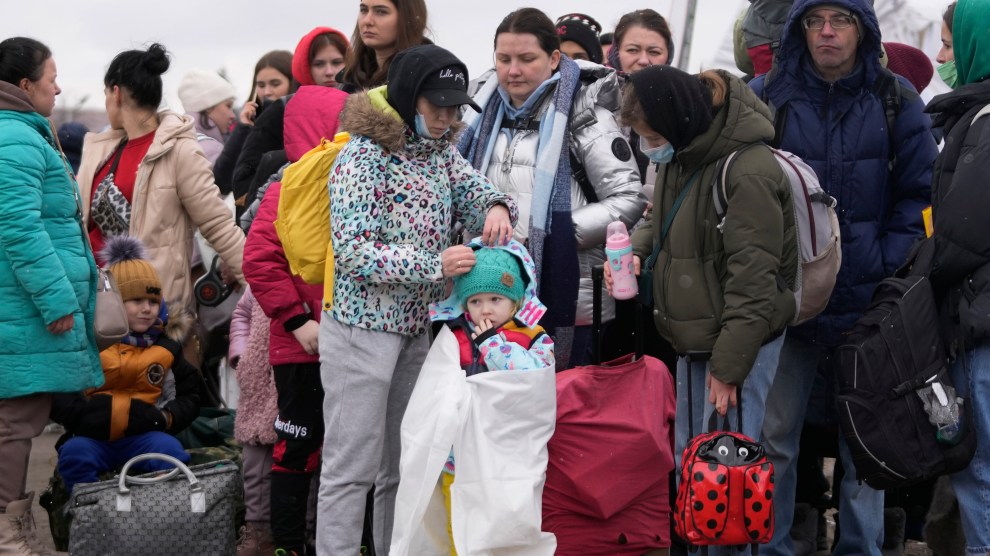 A girl wrapped in a blanket waits with others after fleeing Ukraine at the border crossing in Medyka, Poland on March 5.Markus Schreiber/AP

More than 1.5 million refugees have fled Ukraine since the Russian invasion began 10 days ago, a UN official said Sunday. Filippo Grandi, the high commissioner for refugees, called it “the fastest growing refugee crisis in Europe since World War II.” Grandi has predicted that 4 million Ukrainians could be displaced from their home country by the fighting.

Most of the refugees have gone to Poland, while others have sought shelter in Hungary, Moldova, Slovakia, and Romania. “These are people that until just a few days ago, had a perfectly normal life,” Grandi told CBS’s Face the Nation on Sunday, speaking from a refugee camp at the Ukrainian-Polish border. He said most of the evacuees were women, children, elderly people, and people with disabilities, as Ukrainian men of military age have been conscripted to stay and defend the country.

Grandi said countries outside Europe would need to provide more assistance to those who have fled. “One and a half million [people] is difficult enough to manage, even for relatively stable and prosperous countries in Europe,” he said. “But if this number of people grows, we will need more international support. And at some point, if people stay here for a long period of time, there will have to be other countries offering places to host refugees, even outside Europe.”

The commissioner for refugees added that he was not worried about possible political backlash against Ukrainian refugees, despite the fact that Poland and other European countries in recent years have tried to keep out people of color escaping from conflicts in other parts of the world. “Poland, just in the past year, has tried to build a wall to keep refugees out coming from the Middle East, from Africa,” Face the Nation moderator Margaret Brennan said.

“I think that this crisis, and I’ve said it before, carries an important message that anybody can become a refugee,” Grandi said. “Very suddenly. And that any country can become a front-line refugee receiving country needing the support of others.”

“Europe is learning fast to work together in so many ways in response to this crisis,” he added. “I hope that this working together will apply to all people seeking refuge in Europe, not only now which is happening, but in the future as well.”

Nevertheless, African and South Asian students who were studying in Ukraine say they have experienced racial discrimination while trying to flee Russia’s invasion. Ukrainian border guards have allegedly pushed them to the back of the line of refugees, allowing native Ukrainians to leave the country first.

As they wait, the violence mounts. On Sunday, a top Biden administration official said Russian troops have intentionally attacked civilians in Ukraine. “We’ve seen very credible reports of deliberate attacks on civilians, which would constitute a war crime,” Secretary of State Antony Blinken said on CNN’s State of the Union. “We’ve seen very credible reports about the use of certain weapons.”

adminhttps://australianinternetmarketing.com
Previous articleWebsite Hosting Ideas That Will Inspire You
Next articleUkraine: India doctor stranded with a jaguar and panther

How To Profit From Niche Marketing In The Modern World – Video Course BONUS!

Strategies For Acquiring The Best From World wide web Advertising

How To Profit From Niche Marketing In The Modern World – Video Course BONUS!