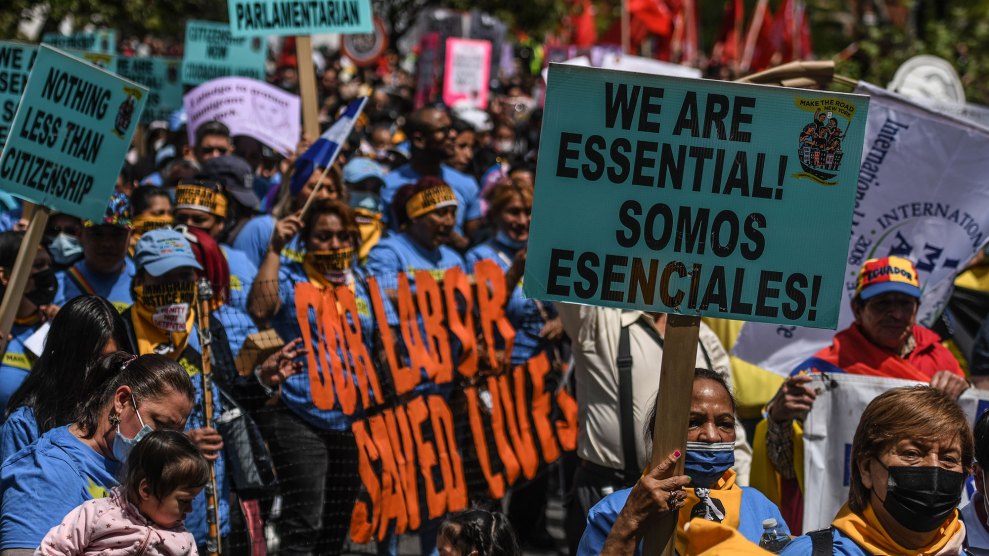 Workers participate in a May Day rally in Manhattan.Stephanie Keith/Getty Images

On International Worker’s Day, often referred to as May Day, immigrant rights organizations, labor rights groups, and their allies marched in about a dozen major cities throughout the United States to highlight how essential immigrant labor is to the country and to call for better worker protections.

In Washington, DC, workers, families, and community leaders gathered at Benjamin Banneker Park and marched through the nation’s capital, passing by Immigration and Customs Enforcement headquarters as they headed for the White House. Organizers said they wanted to “demand that the Biden administration dramatically transform its immigration policy into one that treats immigrants—particularly asylum seekers of color—as human beings who deserve respect and dignity,” according a press release from the Center for Popular Democracy.

On #MayDay, thousands are marching in downtown DC to demand the end to detention centers and a pathway to citizenship.

There are 11 MILLION undocumented workers who are susceptible to exploitation, low wages, and abuses.

More than 1500 CASA members and allies rallied in front of the @WhiteHouse house for #DignityNotDetention. There’s no voice too loud to be part of our movement. Together we shout #DignityNotDetention @POTUS must deliver. ✊🏿✊🏾✊🏽✊🏼#voiceofthemovement #MayDay pic.twitter.com/77ReBd7b9I

New Yorkers gathered at Foley Square Park in Manhattan, urging President Biden to keep his campaign promises and provide permanent protection and a pathway to citizenship for millions of undocumented workers.

A pathway to citizenship can make that possible. #WeAreHome pic.twitter.com/n1CwtexnxZ

A march in Los Angeles started in Chinatown, to show solidarity with Asians who have been victims of a rise in hate crimes, KPCC’s Josie Huang reported.

One of LA’s big #MayDay events is usually held in MacArthur Park.

But this year labor & immigrant activists are starting their march in Chinatown to take a stand against anti-Asian hate.

This is just one of the beautiful banners we carry today, #MayDay2022, to honor workers, immigrants and people of color/LGBTQ+ folk. Join us @ Olympic + Broadway! @SBCCThriveLA #essentialandunited4justice pic.twitter.com/i3Mo97G1uQ

President Biden started out his term by undoing some of the cruel immigration policies of Donald Trump. Republicans said Biden moved too fast, while some Democrats praised his changes but warned he needed to do much more than go back to a pre-Trump world. Sunday’s marches reflected the growing frustrations and strong opposition from groups that helped elect Biden, and from some even within his own administration.

Have You Been Using The Internet To The Total Probable? Check Out These Advertising and marketing Suggestions And See!