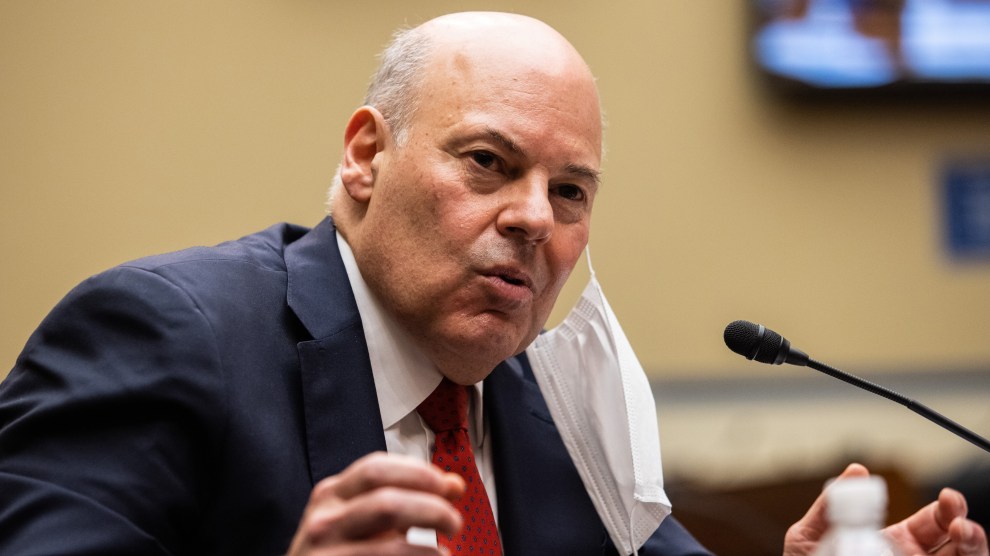 Through snow and rain and gloom of night, hundreds of thousands of unsafe, 30-year-old, gas-guzzling mail trucks traverse the streets of our great nation.

The postal fleet is due for an upgrade. But thanks to Postmaster General and major Trump donor Louis DeJoy, you shouldn’t expect an electric mail truck to come whirring down your street anytime soon.

President Biden has called for federal agencies to phase out the use of gas-powered vehicles, but the USPS, an independent agency, isn’t obligated to follow Biden’s guidelines. So DeJoy—who oversaw the removal of 671 mail sorting machines ahead of the 2020 election; implemented operational changes that dramatically slowed down mail service; and reportedly reimbursed employees for donations to GOP campaigns—oversaw an $11.3 billion contract with Oshkosh Defense for 165,000 trucks for the agency. Ninety percent of those would be gas-powered.

The Environmental Protection Agency issued a furious letter about the decision, calling the Postal Service’s consideration of climate concerns “seriously deficient” and accusing USPS of awarding $482 million to Oshkosh Defense before initiating an environmental review, in violation of Council on Environmental Quality regulations.

There was, eventually, an environmental review, which itself was severely flawed. As the Washington Post reported last week:

In its public comments, the EPA questioned why the Postal Service had assumed in its economic and climate study that battery and gasoline prices would remain the same decades from now and overestimated the amount of greenhouse gas emissions produced by electricity powering plug-in vehicles.

The fleet that DeJoy signed off on would indeed be more fuel-efficient than the ones Seinfeld’s Newman drove in the ’90s—to the tune of 0.4 more miles per gallon. This is a pathetic attempt to cut down gas usage: The current trucks average 8.2 mpg, according to the EPA; the new ones would reach 8.6 mpg.

The USPS, which is more than $200 billion in debt, has blamed its failure to commit to electrifying its fleet on its money woes. “While we can understand why some who are not responsible for the financial sustainability of the Postal Service might prefer that the Postal Service acquire more electric vehicles, the law requires the Postal Service to be self-sufficient,” USPS spokesperson Kimberly Frum said in a statement. The House plans to vote on legislation relieving some of the USPS’s debt in the coming days.

But in buying gas-powered trucks over electric ones, the USPS is mirroring the entire world’s approach to the climate over the past 50 years: solving short-term issues at the expense of long-term economic and environmental improvements. The new gas-guzzling fleet of mail trucks would cause an estimated $900 million in climate damages, according to the EPA. And, despite the USPS’s argument that electrifying the fleet would cost too much money, doing so could save the agency $4.3 billion in the long term, according to one independent analysis.

The inanity of the USPS’s decision-making process isn’t lost on House Democrats. Rep. Gerald Connolly (D-Va.), who leads the House subcommittee overseeing the USPS, has called DeJoy’s decision “antediluvian” and urged the postmaster general to resign. The EPA hasn’t brought the dispute to the White House council that mediates interagency conflicts related to climate, but it has issued the USPS a strongly worded letter. Meanwhile, environmental groups are preparing to sue.

It’s unclear whether DeJoy will heed the EPA’s request to halt the purchase of a new fleet of trucks. EPA officials are hopeful that the USPS may still pivot to a more electric fleet in later years, even if it moves forward with the current mostly-gas contract for 2023.