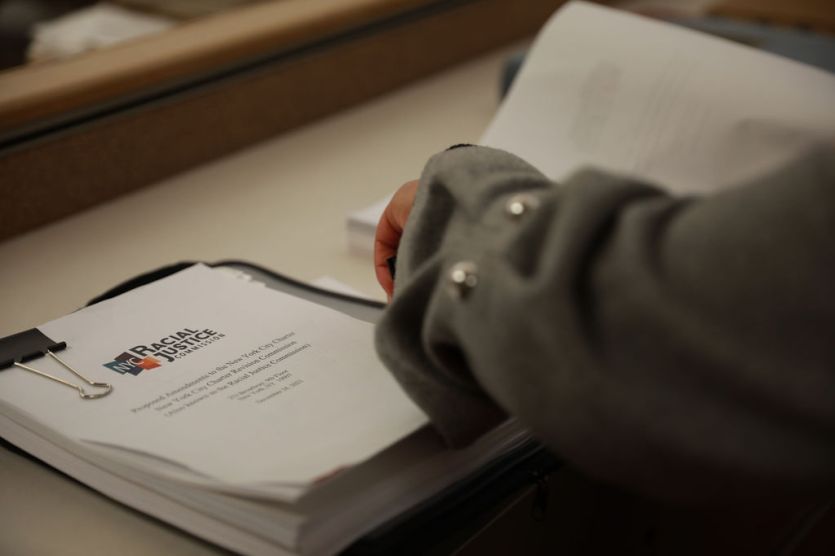 As I reported earlier this week, the Racial Justice Commission and proposed ballot measures were a response to the racial reckoning in the summer of 2020 over police brutality and to a pandemic that disproportionately impacted Black and brown New Yorkers.

The first proposal, to add a preamble to the city’s charter, and the second, to create a Racial Equity office, passed with 70 percent of the vote. The third measure, aimed to accurately measure the cost of living for New Yorkers, was approved by over 80 percent of voters, notably the only measure that right-leaning Staten Island pushed through. The trio’s success was led generally by Brooklyn voters.

The Racial Justice Commissioners, who drafted the measures, were stationed at polling sites across the five boroughs on Election Day to educate voters on the back of their ballots. The measures garnered support from city officials including City Council Speaker Adrienne Adams, Assemblymember Yuh-Line Niou and Comptroller Brad Lander as well as volunteers from Desis Rising Up and Moving (DRUM), BronxWorks and Day of Independence Committee of Panamanians (DICPNY).

Eric Adams, who announced a $5 million investment to educate voters about the initiative in May, did not include a reference to the RJC ballot measures in his Election Day social media posts, focusing instead on promoting a statewide measure to issue climate change bonds.

New York has a history of successful charter amendments—with ballot measures passing by wide margins in 2018 and 2019. (A promo from Lin-Manuel Miranda didn’t hurt.)

Assemblymember Zohran Mamdani—who educated his followers on NYC’s rent guidelines board while running the marathon on Sunday—encouraged voters to approve the ballot measures yesterday.

“Will passing ballot measures two and three in and of themselves solve the deep-rooted issues created by racial capitalism in our city? No.” Mamdani tweeted.

“They will, however, get us closer to those solutions by explicitly stating our goals and creating new requirements about meeting those goals.”

The first draft of the citywide Racial Equity Plan will be released no later than January 16, 2024, while the true cost of living measure will be calculated and published by March 31, 2024, according to the commission.