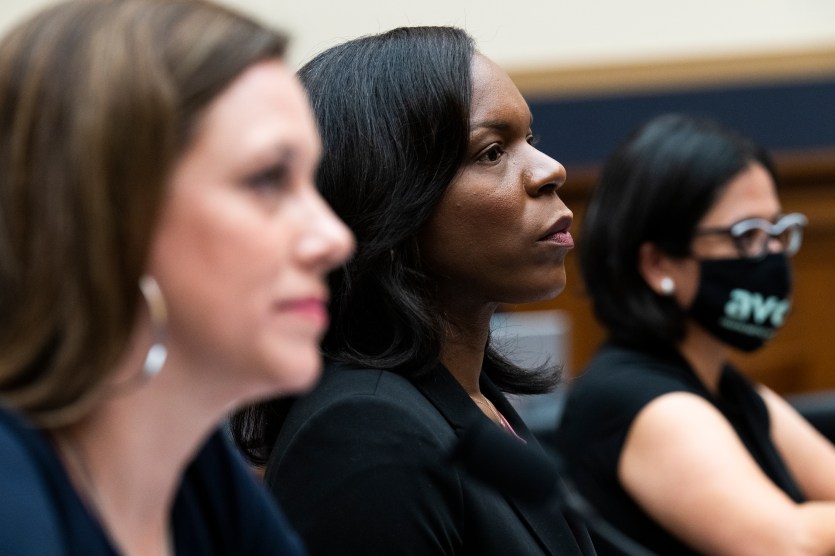 Today’s House hearing on abortion rights was bound to have its share of ignorant and offensive questions, not to mention disinformation, from a certain cohort of white male Republicans. But at times the questions asked of the witnesses—particularly Dr. Yashica Robinson, an OB-GYN and abortion provider in Alabama—were just too absurd, if not simply hateful.

Dripping condescension, but seemingly unaware of what an abortion is, Rep. Mike Johnson (R-La.) repeatedly asked Robinson if she would support the abortion of a child who was “halfway out of the birth canal.”

“I can’t even fathom that,” she replied, “just like you probably can’t imagine what you would do if your daughter was raped. If it hasn’t happened, it may be difficult for you to—.” Johnson cut her off before she could continue.

Rep. Mike Johnson (R-LA) at abortion access hearing: “How about if a child is halfway out of the birth canal? Is an abortion permissible then?”

Dr. Yashica Robinson: “I can’t even fathom that … just like you probably can’t imagine what you would do if your daughter was raped.” pic.twitter.com/LtM92m9JKS

The immense disrespect that these men exhibited toward a testifying doctor, a Black woman, was palpable. “Ms. Robinson, I want to ask you a question,” Rep. Chip Roy (R-Texas) said.

“Yes, my name is Dr. Robinson,” she responded, “and I provide abortion care in Alabama.”

Roy proceeded to ask Robinson how she disposed of “baby parts” removed during dilation and extraction, a procedure used for the very slim percentage of abortions that take place during the second trimester.

Robinson refused to engage with Roy’s inflammatory rhetoric. “I am a physician and a proud abortion provider,” she said. “There is nothing that you can say that makes it difficult for me to talk about the care that I provide.”

And so Robinson was put in the unenviable position of having to dignify Roy with a response. “All of those things that you just mentioned, I have never seen that in a health care setting, ever,” Robinson said. “We don’t put baby parts in freezers or Pyrex dishes.”

Roy then talks over her before Robinson fires back by telling him “I am a physician and a proud abortion provider” pic.twitter.com/NTW5FM9cHa

“The reason that I use she and her pronouns is because I understand that there are people who become pregnant who may not identify that way, and I think it is discriminatory to speak to people or to call them in such a way as they desire not to be called,” Robinson responded. Seems reasonable enough. But did the men who are so intent on denying abortion care to those who need it really care about the answer in the first place?

“I’m a woman,” she replies. pic.twitter.com/KEH4ngYijk

To be clear, not all members of Congress were so bogus today. Here’s Rep. Lucy McBath (D-Ga.) bravely sharing the story of her miscarriages: “The same medicine used to treat my failed pregnancies is the same medicine states like Texas would make illegal,” she said. “If Alabama makes abortion murder, does it make miscarriage manslaughter?”

Rep. Lucy McBath: “After which failed pregnancy should I have been imprisoned? … would you have put me behind bars after my stillbirth, after I was forced to carry a dead fetus for weeks, after asking God if I was ever going to be able to raise a child?” pic.twitter.com/o1XaVVqsZl

Wednesday wasn’t the first time this country’s (mostly white, mostly male) Republican representatives have talked over and down to women, and particularly women of color. With the Supreme Court seemingly poised to overturn Roe v. Wade, it looks like women can’t expect certain men to start treating them as humans anytime soon.

adminhttps://australianinternetmarketing.com
Previous articleGuidelines To Some Successful Website Hosting Program
Next articleBush condemns Putin’s invasion of ‘Iraq’ instead of Ukraine