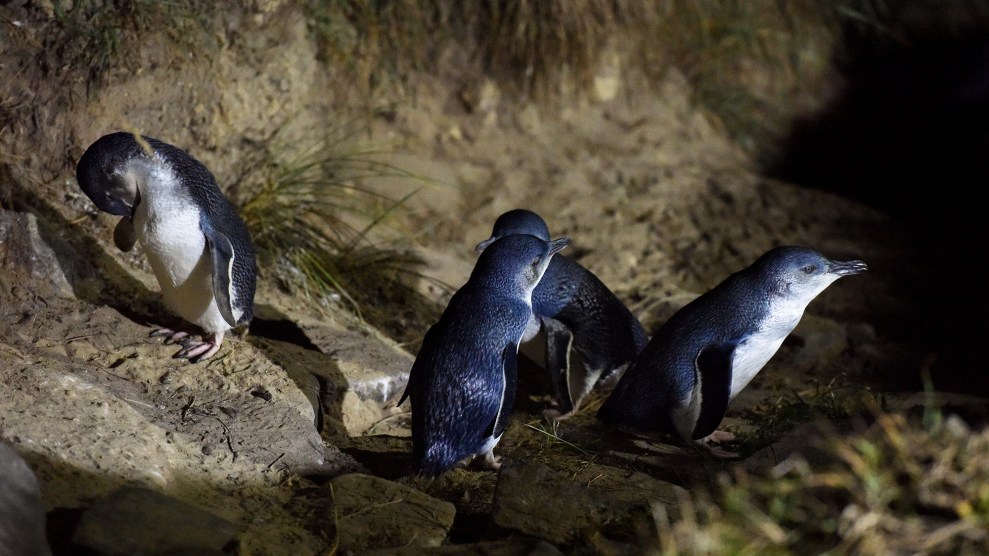 The penguins lie in orderly, evenly spaced rows, wings splayed, their trademark glossy blue plumage dulled by sand. There are 183 in all, carefully collected by local people, laid out and photographed for later investigation. The birds were found at Ninety Mile Beach last week, just the latest in a phenomenon of dead penguins washing up on New Zealand’s beaches in huge numbers.

The kororā, also known as little blue penguins, are the world’s smallest penguin, and are native to New Zealand. They have been a common sight on northern coastlines, seen hopping up the dunes at dusk with their characteristic, slightly stooped waddle, however the Department of Conservation (DoC) classes their population as “at-risk, declining.”

Their deaths have shocked and bewildered locals, who in recent months have found hundreds washed ashore and decaying on the beaches in the North Island. The 183 at Ninety Mile Beach came the same week that more than 100 were found dumped and decaying at the nearby Cable Bay. Local residents photographed another dead flock of 109 at Ninety Mile Beach the close of May, a resident found 40 at Tokerau Beach, also in the Northland region, in mid-May. The DoC has other reports of at least 20 dying on the same beach at the start of the month.

In Northland social media groups, locals discuss the deaths with a growing sense of distress and alarm—are the birds being caught and dumped by fishermen? Is there something in the water? Have they caught some new kind of disease, like avian malaria?

Hi @docgovtnz, 3 dead blue penguins on 90 mile beach today, about 12km north of #Ahipara. All within a 100m stretch of each other. Run over by cars? Or victims of a certain fishing method? #NewZealand #Aotearoa #Wildlife #Penguins@nzherald @NZStuff @Breakfaston1 pic.twitter.com/isuo4OV1Yk

Graeme Taylor, a DoC principal science adviser who studies sea birds, believes more than 500 penguins have washed up since the start of May 2022, and that the figure may be approaching 1,000. It is impossible to give an accurate number, mainly because some are found and buried by people, he says.

Earlier in the year, he says, scientists from the Ministry of Primary Industries decided to test some of the dead birds in case a new virus or disease was sweeping through the colonies. They looked for infections and toxins. They concluded that the birds were starving to death.

“All of the bodies were found to be super underweight. These birds should be around 800 to 1,000 grams, but they were way down around half that weight,” Taylor says. “There was just no body fat on them, there was hardly any muscle to show. When they get to that stage of emaciation, they can’t dive.” Eventually, the birds simply die—of starvation or hypothermia from the lack of blubber to keep them warm.

The DoC believes Kororā are not starving because of overfishing. Rather, climate change was creating waters too hot for the fish they feed on. Data released last year saw the hottest ocean temperatures in recorded history, the sixth consecutive year that this record has been broken. In New Zealand, that has combined with a La Nina weather conditions to create marine heatwaves. As waters warm, the small fish that kororā eat go deeper in search of cooler waters, or leave the area entirely.

“This little species [of penguin] can dive down to 20 or 30 meters routinely, but it’s not that good at diving a lot deeper than that,” Taylor says. Hot water temperatures through winter had likely kept the fish out of reach.

Mass deaths of sea birds are not unheard of historically: severe storms, heatwaves or weather events can result in birds washing ashore in the tens or hundreds. What has changed, Taylor says, is the frequency. Previously, deaths in these numbers would occur maybe once a decade. Over the past 10 years, he says there have been at least three mass-death years, and their frequency was increasing.

Ian Armitage, a member of the governing council for Birds New Zealand, which runs beach patrols to monitor dead sea-bird numbers, says the number of penguins found this year has been unusually high, particularly in the far north. Recent storms and high water temperatures mean he expects more mass deaths. “This event is probably not over and will continue through the winter,” Armitage says. “Many more little penguins found.”

As human-driven climate change continues to heat the globe and its oceans, eventually, the species could be wiped out in warmer North Island regions. “As you start seeing it happen regularly like this, then there’s really not much chance for the birds to recover between the events, and rebuild the numbers again,” Taylor says.

In the South’s colder waters, he says, populations are still doing well. “But the northern population are definitely in a very poor state. And when we get summer events like this happening at the frequency that’s been happening in the past 10 years, they really will be under pressure to be able to survive.”

adminhttps://australianinternetmarketing.com
Previous articleA Lot Of Things You Should Know About Website Hosting
Next articleBaffled By Site Advertising? Look At These Helpful Suggestions!

The Ideal Article Around For Web Designing