Frustrated by US Climate Inaction, These GenZ Activists Have Taken Matters Into Their Own Hands 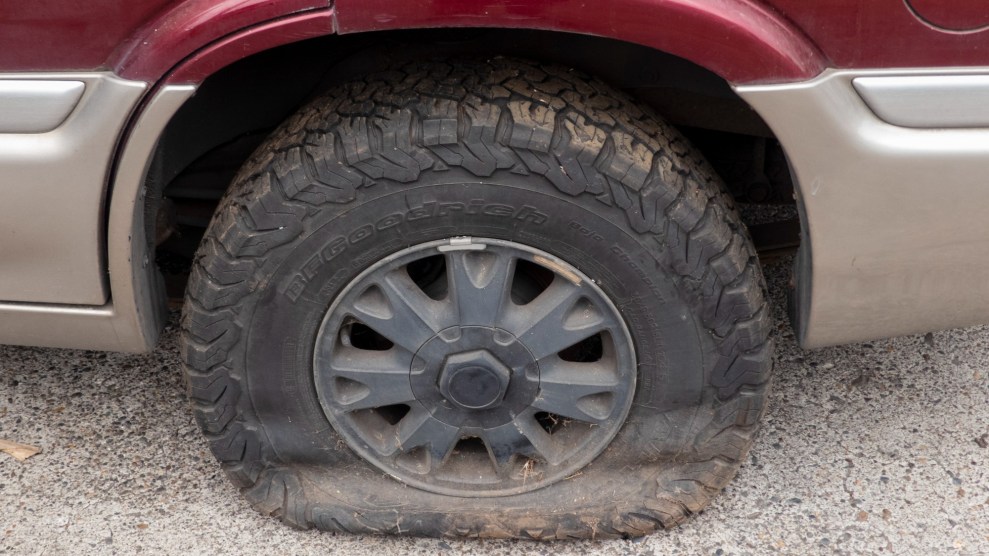 This story was originally published by The Guardian and is reproduced here as part of the Climate Desk collaboration.

On a searingly hot night in New York City, a group of mask-wearing activists grasping bags of lentils set out to stage the biggest blitzkrieg yet upon a new target for climate campaigners in the US—the tires of SUVs.

The group—a mixture of ages and genders—split up as midnight approached, heading down the streets of the Upper East Side, lined by some of the most expensive apartments in the world and a gleaming parade of high-end, parked SUVs. This type of vehicle is the second largest cause of the global rise in carbon dioxide emissions over the past decade.

The Tyre Extinguishers, as they call themselves, furtively hand around bags of lentils ahead of their raid (the legumes are jammed into a tire valve to release its air slowly overnight) and size up their quarry.

A hulking Land Rover, sporting a parking permit for a Hamptons beach, is an obvious initial target, but a loitering doorman from a nearby apartment complex unnerves the group. They scurry down the street, then double back and settle upon an Audi.

One of the group kneels down, unscrews the tire valve cap, stuffs a lentil inside, and puts the cap back on. The tire immediately lets out a startled “pfft” noise, a leaflet is slapped onto the windshield and the group melts back into the night.

The Tyre Extinguishers movement started in the UK, spread to a clutch of other countries, and has now landed in the US. Since June, dozens of SUV and pickup truck owners in New York, the San Francisco Bay Area, and Chicago have discovered their vehicles with flat tires along with a note on the windshield declaring: “Your gas guzzler kills.”

The leaflet, complete with a Ghostbusters-style picture of a crossed-out SUV, states the vast amounts of planet-heating emissions generated by the vehicles are “nails in the coffin of our climate”, adding: “You’ll be angry, but don’t take it personally. It’s not you, it’s your car.”

America has embraced large SUVs like no other country, even in liberal, walkable areas like the Upper East Side, so the activists face a steep task in attaching stigma to the supersized cars that now dominate US streets. But Tyre Extinguishers’ nascent US operation has been flooded with insults and even death threats. One message vowed to “deflate your lungs” while another critic, in a nod to the British roots of the campaign, wrote: “Damn you, Redcoats!”

The death threats aren’t a big concern, an activist named Alex insisted. “People have emailed ‘if you fuck up my SUV I will kill you’, which I get a kick out of, to be honest,” she said. “You’re not going to find me. It’s like, why are you so mad?”

Via a flurry of emails and text messages, Alex was thrown together with a handful of other Tyre Extinguisher volunteers – the group has a central contact point on its website but is purposely decentralized and cloaked in anonymity – for the latest salvo on SUVs, which the Guardian observed.

“The amount of damage from a flat tire is nothing compared to climate change,” said one member of the group as we moved away from the first deflation, Central Park looming into sight through the dark. “Why do you need an SUV, especially in New York? It’s a vanity thing. You have freedom of choice, sure, but you don’t have freedom from consequences.”

An army of SUV owners across the US would probably disagree. Sedan cars long reigned as the best-selling category across America but SUVs overtook them in 2015 and haven’t looked back. When you include pickup trucks (such as the chunky Ford F-150, which has been America’s best-selling vehicle since Ronald Reagan was president), large, truck-like vehicles now make up nearly three-quarters of all car sales in the US.

Modern SUVs offer comfort with a veneer of adventure and ruggedness, even for urban dwellers – a few Toyota Sequoias, named after the towering trees found in a mountain range 3,000 miles from New York that are on fire because of the climate emergency, dotted the Upper East Side streets. Americans have simply found the need or desire to drive huge cars. “We need a larger vehicle because I have two sons that are special needs,” explained Quanda Ellis-Walker, who had her tire deflated in California. “It was terrifying to know that someone would come and do this to you.”

However, because SUVs combine the weight of an adult rhinoceros and the aerodynamics of a refrigerator, they require more energy to move around than smaller cars and therefore emit more pollution. As their popularity has soared, so has their impact upon the climate crisis.

Over the past decade, the emissions from SUVs eclipsed all shipping, aviation, heavy industry and even trucks, usually the only vehicles to outsize them on the road. The world’s SUVs belch out 700 megatonnes of CO2 a year, about the entire output of the UK and Netherlands combined.

While many US cities lack decent public transport options, “it does not follow logically that we should flood our streets with dangerous, oversized, glacier-melting SUVs when smaller and more efficient vehicles that could easily satisfy most motorists’ needs exist,” according to Doug Gordon, co-host of the popular The War on Cars podcast and an avid New York cyclist. “If the Tyre Extinguishers spark a conversation about the absurdity of driving a 6,000-pound Cadillac Escalade to pick up a 60-pound kid from soccer practice, then good for them.”

As the acts of minor sabotage mounted last Wednesday, the activists had to invoke some self-imposed rules. No SUVs with disabled stickers were targeted, nor anything that appeared to be used for certain work. A vehicle was chosen for a deflation only for the group to notice it had a “surgeon” sign in the window – the lentil was swiftly removed before the tire fully deflated. Conversely, an SUV that was deemed “so huge, so gross” had two of its tires collapsed.

By the early hours of the morning, 55 SUVs had been “disarmed”, as the group calls it. No one intervened, not even a group of boisterous drunk young people who staggered past a deflation in progress. The group was wary, however, of security cameras, as the NYPD has circulated grainy footage of a previous deflation operation in an attempt to identify the culprits.

Tampering with random people’s property for being harmful to the environment is a departure from standard climate protests, which usually involve mass marches with signs, school “strikes” or direct action taken against large entities, such as Exxon or a bank. Tire deflations feel more like a pointed, personal judgment against a fellow citizen.

“It is like a public shaming,” said Dana Fisher, a sociologist at the University of Maryland who has researched environmental protests since the 1990s. “The target of public shaming is very unlikely to change their opinion from the shaming, so the question is, what’s the point? It’s an innovative, simple tactic to take the air out of someone’s tires, it’s not harmful, it’s just annoying. It’s like the training wheels to something confrontational.”

Fisher said she had noticed climate campaigners were becoming more confrontational, as frustration mounts over the dawdling pace of action to tackle the climate crisis. In the US, a summer that has seen record heatwaves, the supreme court boxing in the federal government’s response to the crisis, and Congress yet again failing to deliver climate legislation will probably only fuel the impotent rage.

“There are a lot of people who care about the environment who are very disappointed and are looking for a protest tactic,” said Fisher. “You have people flying in private jets and driving SUVs, so there are lots of opportunities for bad feelings between people with different views on that. It wouldn’t surprise me if these actions are the start of something more confrontational and more destructive. I can see it exploding at some point.”

It was a sweltering night, part of New York’s longest heatwave in a decade. By the time the group wrapped up, the temperature was still near 86 degrees, another hot day on a heating planet, much of it seemingly on fire.

Earlier on the same day, Joe Biden had donned his aviators and delivered a speech calling the climate crisis a “clear and present danger” and announcing measures that didn’t come close to addressing it.

Faced with existential disaster, we are still largely responding with warnings and symbolic gestures, whether that’s from the most powerful man in the world or a gaggle of Gen Z activists poking at wealthy liberal hypocrisy in Manhattan.