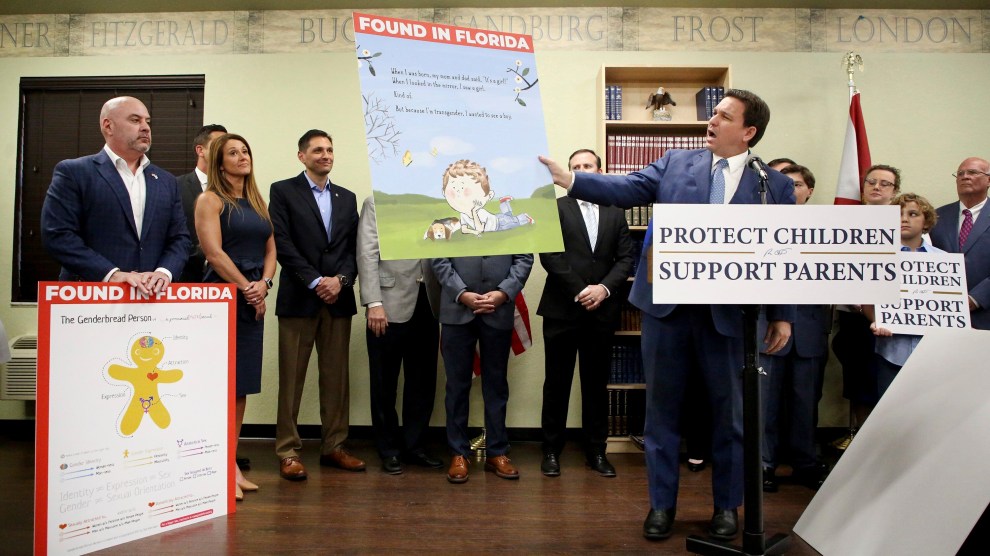 Florida has a new addition to the long, absurd list of topics it considers too “woke” to tolerate: math textbooks.

The press release does not provide any examples of the offending material, but it does say that 54 of 132 submitted textbooks were rejected, including 71 percent of materials proposed for grades K–5. The materials did not comply with the state’s educational standards, which apparently emphasize real-world context for math problems and discourage “unsolicited strategies” such as “culturally responsive teaching.”

Florida Gov. Ron DeSantis has made education—and stoking fears of child indoctrination by liberals—one of his top priorities. In 2019, he signed an executive order eliminating Common Core, a set of educational standards introduced in 2010 to improve students’ academic performance and standardize what kids learn in different states. He followed that up by proposing the notorious Stop W.O.K.E. Act, which seeks to shield students and workers from feeling “guilt, anguish, or other forms of psychological distress for actions, in which he or she played no part, committed in the past by other members of the same race or sex.” Last but not least is the so-called “Don’t Say Gay” bill, signed into law last month, which imposes broad restrictions on how educators can talk about gender and sexuality.

“It is unfortunate that several publishers, especially at the elementary school grade levels, have…attempted to slip rebranded instructional materials based on Common Core Standards into Florida’s classrooms,” the Florida Department of Education said in its press release, as if the math problems were Fight Club-style subliminal messaging. “Others have included prohibited and divisive concepts such as the tenants [sic] of CRT or other unsolicited strategies of indoctrination – despite FDOE’s prior notification.”