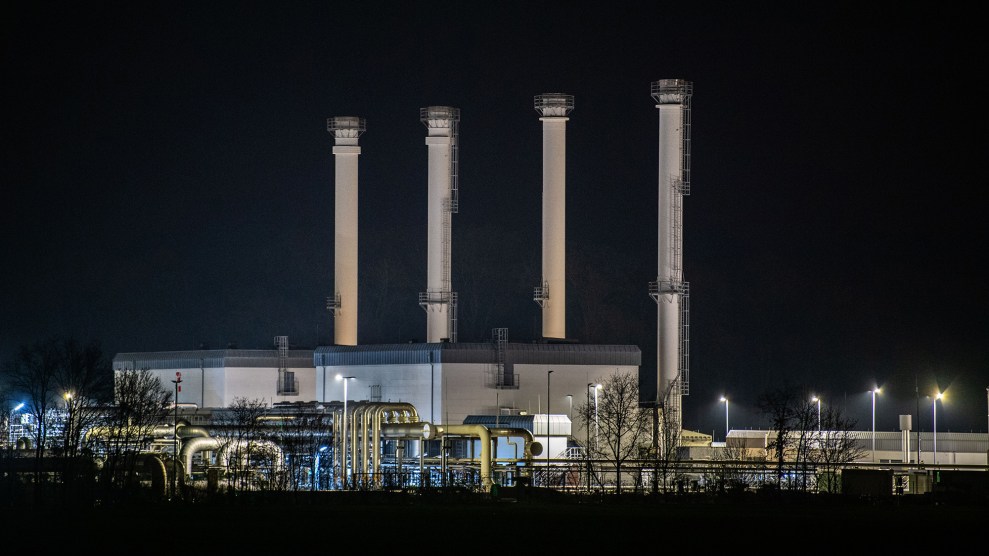 This story was originally published by Wired and is reproduced here as part of the Climate Desk collaboration.

In 1970, West German politicians and gas executives signed a landmark deal with the Soviet Union that would shape the next half-century of European energy policy. West Germany promised to supply the USSR with steel pipes, while in exchange the USSR would extend a gas pipeline to the border of West Germany and start pumping Soviet gas beneath the Iron Curtain and into Western Europe. The trade deal was one form of Ostpolitik—a wider policy of thawing relations between the USSR and West Germany that would earn then West German chancellor Willy Brandt the Nobel Peace Prize in 1971.

Brandt—who died in 1992—may not have imagined just how intertwined the two former enemies would become. By the time of German reunification in 1990, gas from the USSR accounted for more than 30 percent of the country’s gas consumption. By 2021, Russia was supplying around 40 percent of the European Union’s natural gas, with some smaller countries, such as Latvia, almost completely reliant on Russia for their supplies. Germany, with its heavy steel industry and gas-powered heating, relied on Russia for just under half of its natural gas.

The Russian invasion of Ukraine in February 2022 exposed deep fissures in the EU’s energy policy. After EU sanctions on Russia, the Russian state-controlled energy firm Gazprom announced it was slashing gas exports through one of its main pipelines to about 20 percent of capacity. The share of Russian gas entering Europe has dropped to 15 percent, squeezing already-inflated prices to new highs. In the UK, which is sensitive to gas prices on international markets, average energy bills are projected to reach nearly four times their January 2019 levels.

“It is important to acknowledge for the EU that increasing this dependency on Russia has been a policy failure,” says Ganna Gladkykh, a researcher at the European Energy Research Alliance. The continent is now facing two challenges. First, a cold winter—or several—with gas supplies stretched to their limit, could mean forced blackouts and industry shutdowns. Second, Europe must reduce its dependence on Russian gas, striking new deals with different suppliers and stepping up its renewable rollout. At the end of that road, Europe may find itself in a new era of energy security—no longer reliant on an unpredictable neighbor to the east, but with new dynamics that may bring their own problems.

But first: the crunch. In late July, European Union member states agreed to reduce their gas demand by 15 percent between August 2022 and March 2023. The measures are voluntary, but the EU Council has warned that they may be made mandatory if gas security reaches crisis levels. Some countries have already taken small steps to limit energy demand. Cities in Germany are switching off public lighting, lowering thermostats, and closing swimming pools in order to reduce dependence on Russian gas. France has banned shops from running air-conditioning while doors are open, while Spain—which does not import much Russian gas—now prohibits air-conditioning from being set to less than 27 degrees Celsius (80 degrees Fahrenheit) in public places.

Natural gas is used in three primary ways: for generating electricity in power plants, for heating homes and offices, and in industries like steelmaking and fertilizer manufacture. Although there are alternatives to gas in power plants—German chancellor Olaf Scholz has raised the possibility of extending the life of nuclear power plants in order to cut down gas usage—it’s much harder to find alternatives to gas for industry and heating. The EU also has rules that protect households, hospitals, schools, and other essential services from gas-rationing measures.

About a quarter of natural gas in the EU goes to industry—which means that sector may well have to shoulder a large part of the burden of gas reduction, says Chi Kong Chyong, a research associate at the University of Cambridge. The EU is encouraging companies to switch to other forms of fuel, and it has asked member states to draw up lists of which businesses should be asked to stop production in the event of sudden gas shortages. German steelmarker ThyssenKrupp has said it could cope with restricted production, but warns that it may face shutdowns or damage in the event of a gas shortage. The chemical firm BASF has said it will slow down fertilizer production in response to high gas prices.

“The really urgent and tricky thing is heating,” says Gladkykh. About half of German homes are heated by gas, accounting for about one-third of all the country’s gas consumption. Because consumers are protected from gas rationing by law, the German government is limited in what it can do to limit gas consumption in homes. But advisers to German climate and economic minister Robert Habeck say that high gas prices will likely cause households to reduce their usage anyway. In other words, people will turn their heating down simply because they can’t afford to keep it on.

While the EU is trying to curb gas usage, it’s also frantically trying to fill up its gas reserves before winter hits. It has set a target of refilling storage to 80 percent of capacity by November 1, which it is on target to reach, although at a cost 10 times higher than the historical average. All of this means that the EU should be able to weather a winter of tight gas supplies, but in the long run it will need to find a way to reduce its reliance on Russian gas altogether.

Even if a cease-fire in Ukraine is negotiated, it’s unlikely that the EU will go back to sourcing so much of its gas from Russia. “It’s difficult to imagine that we’d be going back to the situation that we had prior to the invasion in Ukraine,” says Chyong. To plug these future gaps, the EU and its member states are negotiating new gas supply deals with Azerbaijan and Italy as well as increasing capacity to receive shipments of liquified natural gas from the US and Qatar. But these aren’t quick fixes—it will take years to ramp up gas supply from new countries.

In May the European Commission published its plan to end the EU’s dependence on Russian fossil fuels. The €210 billion ($213 billion) plan calls for a huge scaling-up of renewable energy generation, including a scheme to double installed solar panel capacity in the EU by 2025 and a doubling of the rate of heat pump installation. The EU currently has a target to produce 40 percent of its electricity from renewable sources by 2030, but the commission is proposing to increase that target to 45 percent. The plan also includes support for industries to replace gas with hydrogen, biogas, and biomethane to further reduce dependence on Russian fossil fuels.

“This crisis is a time when we ought to be doubling down on our transition to low-carbon energy,” says Jim Watson, professor of energy policy at University College London. Yet the commission’s plan to get away from Russian gas includes an extra €10 billion of investment in additional gas infrastructure. This might sound like a small sum, says Gladkykh, but it locks the EU into purchasing gas for years to come. “We need to be really careful that this does not create new dependencies that do not lead to net zero goals,” she says.

And in the medium term it may be that households are forced to reduce their energy intake—not because of government directives, but because the sheer cost of energy forces people to find ways to reduce their bills. Heat pumps are much more efficient than gas boilers at heating homes, but the high price of electricity reduces some of the cost-saving benefits. Gas prices are likely to stay high for a few years, says Chyong, and that may be enough to push people to install heat pumps—at least for those who can afford them. Rising fuel prices could push half of UK households into fuel poverty by next year, according to one study. By 2030 the EU should have overturned its reliance on Russian gas for good, but getting there will mean several tough years of energy squeezes.

Methods For How You Can Best Avoid Failure With Forex Trading