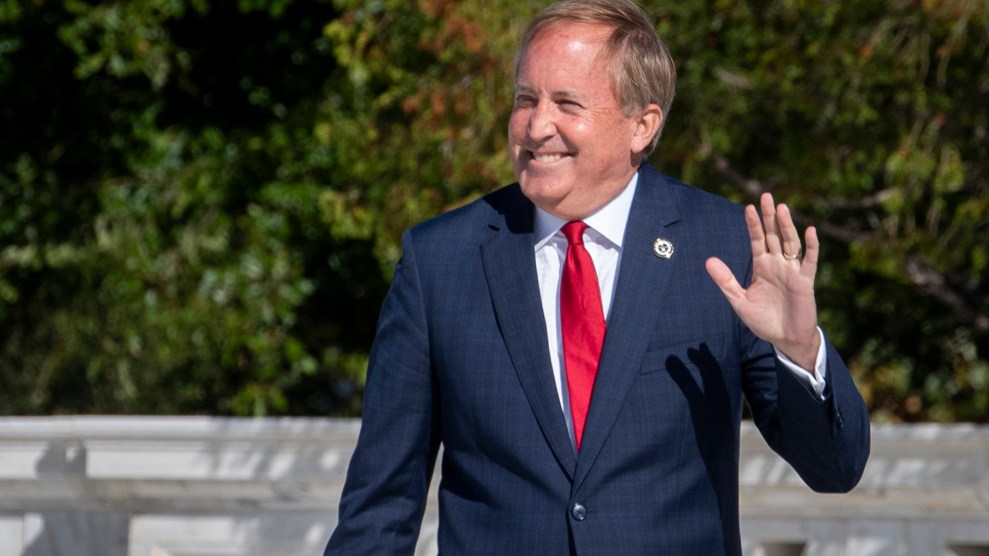 Texas Attorney General Ken Paxton isn’t just running for a third term while under indictment for securities fraud—he’s running from process servers too.

On Monday morning, according to an affidavit filed in federal court, Paxton and his wife, state Sen. Angela Paxton, embarked on a Coen Brothers-esque escape from a man who was attempting to hand the AG a subpoena to appear in federal court. Paxton had been named in a class-action lawsuit filed by reproductive rights groups in the state, who are seeking an injunction to block prosecutors from using a 2021 law to target groups that help Texans obtain abortions in other states.

According to the affidavit, the process server, Ernesto Herrera, parked outside the Paxtons’ home, knocked on the door, and saw both the attorney general and his wife come to the door. But upon seeing Herrera, the AG backed away and let his wife handle the interaction. Herrera identified himself as a process server “trying to deliver important legal documents to Mr. Paxton.” She told him that the AG was on the phone and then in a hurry to leave, after which Herrera handed her his business card, and then returned to his car to wait.

Not long after, the affidavit stated, Paxton’s driver pulled up in a Chevy Tahoe, and the AG began walking out to the vehicle. Then Herrera called out his name. “As soon as he heard me call his name out, he turned around and RAN back inside the house through the same door in the garage.” A few minutes after that, Paxton’s wife ventured out and started the couple’s truck, which was also parked in the driveway. Then the attorney general “RAN from the door inside the garage towards the rear door behind the driver side.” Herrera attempted to serve the documents, again identifying himself, and eventually left them on the ground outside the vehicle.

Paxton responded angrily to the Texas Tribune’s write-up of the incident on Tuesday morning, framing the encounter as a precautionary maneuver at a time when elected officials are being subjected to violent threats.

“All across the country, conservatives have faced threats to their safety—many threats that received scant coverage or condemnation from the mainstream media,” he tweeted. “It’s clear that the media wants to drum up another controversy involving my work as Attorney General, so they’re attacking me for having the audacity to avoid a stranger lingering outside my home and showing concern about the safety and well-being of my family.” In a subsequent statement, Paxton invoked the Second Amendment and said that the server was lucky the situation didn’t “necessitate force.”

But if it was concern for the safety and well-being of his family that compelled Paxton to flee from a suspicious man with a manila envelope, it’s not really clear why his wife dealt with him. If anyone is familiar with what it’s like to be subpoenaed, it’s the scandal-plagued attorney general of Texas.

Paxton’s panicked extraction is a fitting addendum to the lawsuit he has been named in, and the broader legal environment of fear and surveillance that he has helped cultivate.

Texas is a state that, with Paxton’s explicit backing, investigates the parents of trans kids for child abuse. It’s a state where, again with Paxton’s support, ordinary citizens have been deputized to collect bounties on fellow citizens seeking abortions. And it’s a state where investigators searching for evidence of voter fraud peep through bathroom windows.

Several of the reproductive rights groups who are suing Paxton have already been targeted by powerful anti-abortion groups and elected officials seeking to depose them and collect information on their donors, part of what my colleague Pema Levy characterized as the “dystopian…rise of vigilante enforcement to reverse progress and entrench physical and psychological control over women, LGBTQ people, and people of color.”

The groups targeted by Paxton’s legal regime really are operating in a climate of fear and intimidation that’s been imposed on them by the state, but you don’t see them cavalierly talking about using the Second Amendment against a process server. In this case, it’s the person most committed to eroding the privacy of others who’s complaining loudest about his own.