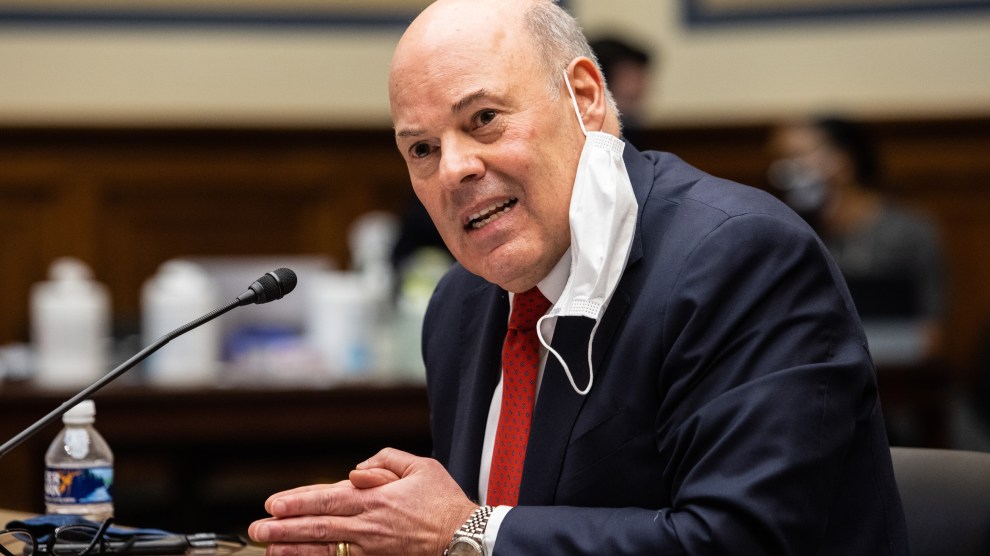 No one, not even the president or the Environmental Protection Agency, is going to get in the way of Postmaster General Louis DeJoy’s fleet of gas-powered mail trucks.

Despite the EPA’s objections, DeJoy’s Postal Service has finalized a $6 billion contract with Oshkosh Defense for 165,000 new, state-of-the-art mail trucks—90 percent of which would be gas-powered vehicles earning 8.6 miles per gallon. This goes against a Biden initiative to make federal vehicles electric. And it also goes against logic. Gas-powered vehicles are fueling climate change, which is intensifying wildfires and increasing the frequency and severity of tropical storms. Electric mail trucks wouldn’t solve the climate crisis, but they’d be a step in the right direction.

“As we have reiterated throughout this process, our commitment to an electric fleet remains ambitious given the pressing vehicle and safety needs of our aging fleet as well as our fragile financial condition,” DeJoy said in a statement released today. “As our financial position improves with the ongoing implementation of our 10-year plan, Delivering for America, we will continue to pursue the acquisition of additional BEV as additional funding—from either internal or congressional sources—becomes available.”

As I wrote earlier this month, President Biden has suggested that federal agencies phase out the use of gas-powered trucks, but he has no power to compel the USPS, an independent agency, to do so. The biggest problem with DeJoy’s acquisition of gas-powered trucks—aside from contributing to climate change—is that it ran afoul of procedure. DeJoy failed to initiate a mandatory environmental review until after awarding the contract to Oshkosh Defense. When the Postal Service did ultimately conduct an environmental review, the EPA contended that it was deeply flawed.

Even as DeJoy moves forward with his plan to purchase new trucks, the insufficiency of the environmental review could be enough to invalidate the contract in court, Bloomberg suggests. Up next: the inevitable lawsuits from environmental groups.

The new gas-powered trucks could cause $900 million in climate damages, according to the EPA, while electrifying the fleet could save the agency billions in the long term. But as Patricio Portillo of the Natural Resources Defense Council said today, “Neither rain, nor sleet, nor financial good sense will stop the leaders of the US Postal Service from trying to buy dirty, polluting delivery trucks.”

Melania Trump Continues Her White House Legacy: Bitter and Petty as Ever