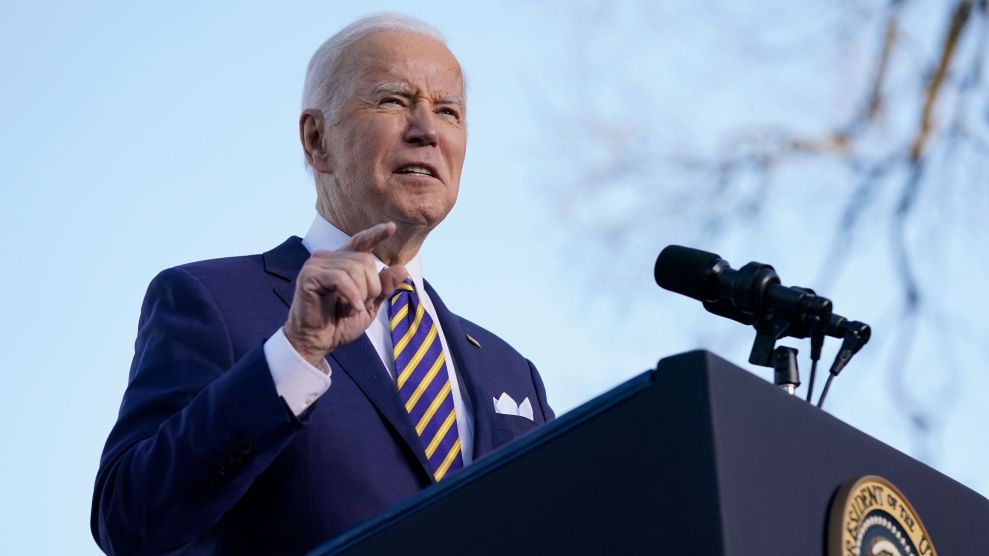 In a major speech delivered on Tuesday in Atlanta, President Joe Biden officially threw his weight behind efforts to alter the Senate’s filibuster rule to pass new voting rights protections. Ever the institutionalist, Biden didn’t go so far as to advocate eliminating the filibuster altogether, instead saying that he supported a carveout for the purpose of protecting voting rights. But the speech still constituted Biden’s most significant push yet to combat Republican-backed voting restrictions in states across the country.

“Sadly, the United States Senate…has been rendered a shell of its former self,” he said. “It gives me no satisfaction in saying that, as an institutionalist, as a man who was honored to serve in the Senate. But as an institutionalist, I believe that the threat to our democracy is so grave that we must find a way to pass these voting rights bills…And if that bare minimum is blocked, we have no option but to change the Senate rules, including getting rid of the filibuster for this.”

Biden previously defended the filibuster as a senator, and in July he said he didn’t want to get “wrapped up” in a debate over a rules change. But today he came out strongly in favor of reform, saying it was essential to prevent what he called “Jim Crow 2.0.”

“State legislatures can pass anti-voting laws with simple majorities,” he said. “If they can do that, the United States Senate should be able to protect voting rights by a simple majority. Today, I’m making it clear: To protect our democracy, I support changing the Senate rules, whichever way they need to be changed to prevent a minority of senators from blocking action on voting rights. When it comes to protecting majority rule in America, the majority should rule in the United States Senate.”

During the day of his address, Biden took symbolic actions that linked the fight for voting rights to the struggle for civil rights, visiting Martin Luther King Jr.’s crypt and Ebenezer Baptist Church, where King served as a co-pastor and where both he and Rep. John Lewis—a civil rights icon—were eulogized. During his speech, Biden said that he had come to “the cradle of civil rights” to make clear what must come after January 6, “that dreadful day when a dagger was held at the throat of American democracy.”

Throughout his speech, Biden condemned Republicans for attempting “to turn the will of the voters into a mere suggestion—something states can either respect or ignore.”

Biden also referenced the specter of Donald Trump, repeatedly referring to him as the “defeated former president” and condemning him for attempting to subvert the American electoral process. “The goal of the former president and his allies is to disenfranchise anyone who votes against them. Simple as that,” he charged. “That’s the kind of power you see in totalitarian states, not in democracies.”

Expectations were high in the build-up to today’s speech. On January 3, top Democrats announced that they plan to hold a crucial vote to reform the filibuster by January 17, Martin Luther King Jr. Day. Without a rules change, the Freedom to Vote Act and the John Lewis Voting Rights Advancement Act—the two bills at the core of the Democratic voting rights agenda—have virtually no chance of passing the 50–50 Senate. Together, the bills would reestablish the protections of the 1965 Voting Rights Act, which the Supreme Court gutted in 2013, as well as preempt restrictions on early and mail-in voting, make Election Day a national holiday, and prevent state legislatures from gerrymandering electoral maps.

The Democratic strategy seems to rely on Biden rallying public support, while Sens. Angus King (I-Maine), Jon Tester (D-Mont.), and Tim Kaine (D-Va.) work behind the scenes to draft a rules reform and cut deals with holdouts. But the Democrats have thus far struggled to bring onboard the two lawmakers most likely to tank the effort: Sens. Kyrsten Sinema (D-Ariz.) and Joe Manchin (D-W.Va.). Both have expressed outright opposition to a filibuster carveout. Even Biden changing his position on the filibuster is unlikely to have a significant effect on their insistence that the filibuster is fundamental to the workings of the Senate. In addition, Democratic moderate Sens. Mark Kelly (D-Ariz.), and Jeanne Shaheen (D-N.H.) have also expressed reservations about a filibuster exception.

With the chance of success dimming, several high-profile voting rights groups publicly spurned Biden and refused to attend today’s speech. In a furious public statement, the groups lambasted both Biden and Vice President Kamala Harris for not presenting a “finalized voting rights plan that will pass both chambers.”

“Georgia voters made history and made their voices heard, overcoming obstacles, threats, and suppressive laws to deliver the White House and the US Senate,” the groups wrote. “In return, a visit has been forced on them, requiring them to accept political platitudes and repetitious, bland promises. Such an empty gesture, without concrete action, without signs of real, tangible work, is unacceptable.”

Biden didn’t directly address these concerns, but he did repeatedly emphasize the importance of turning talk on voting rights into action, saying he was “tired of being quiet,” slapping the lectern for emphasis.

“Let’s spread the faith and get this done,” he said as he concluded his speech. “I mean it. Let’s go get this done.”