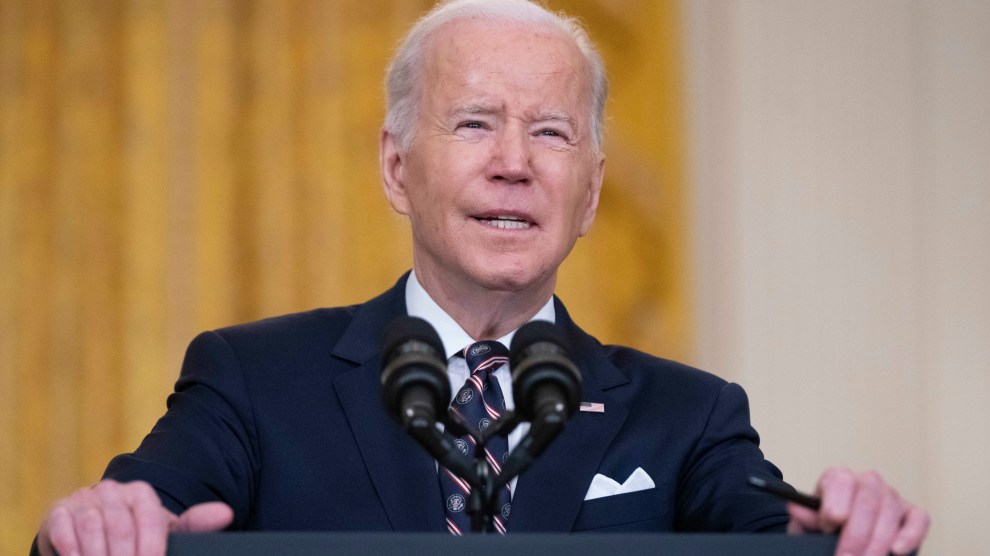 On Monday, Russian President Vladimir Putin recognized two regions of eastern Ukraine as sovereign territories, increasing the likelihood of a war and prompting swift action from the United States. In a brief speech at the White House this afternoon, President Biden responded by announcing harsh economic sanctions against Russia, targeting banks and elite individuals.

“Who in the lord’s name does Putin thinks gives him the right to declare new so-called countries on territory that belonged to his neighbors?” Biden said Tuesday.

For the first time, Biden referred to the presence of Russian troops in Ukraine as an “invasion.” He announced sanctions on major Russian bank VEB, the nation’s military bank, and its sovereign debt. “That means we’ve cut off Russia’s government from Western financing,” Biden said. “It can no longer raise money from the West and cannot trade its new debt on our markets, or European markets either.”

Part of the Biden administration’s effort, the official said, is to weaken “Europe’s addiction to Russian gas.” On Monday, the German government announced that it would stop certification of the Nord Stream 2 pipeline, a signal of Europe becoming more united in its response to Russia.

The sanctions do not target Putin personally, but affect Russian banks and a range of Russian elites. “No Russian financial institution is safe if this invasion proceeds,” the official said.

Because Russia is a major supplier of oil, Biden acknowledged on Tuesday that the sanctions could further drive up already-soaring gas prices in the US. “I want to limit the pain the American people are feeling at the gas pump,” he said, adding that his administration would be “executing a plan in coordination with major oil producing consumers and producers towards a collective investment to secure stability and global energy supplies.”