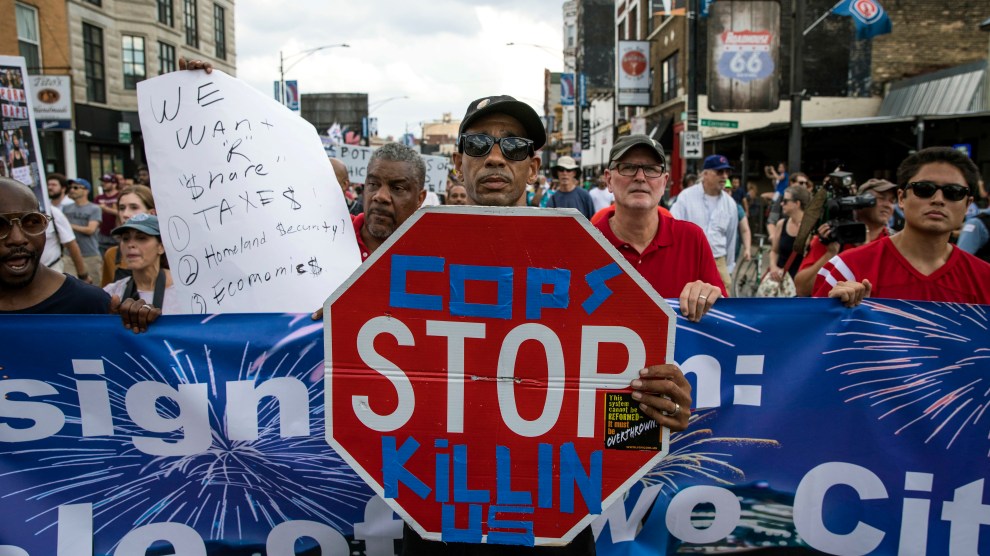 Nearly two years after George Floyd’s murder sparked nationwide protests, Democratic mayors who once seemed sympathetic to reducing police brutality are now, more and more, pointing to law enforcement as a solution to the rising community gun violence around the country. New York’s Eric Adams, San Francisco’s London Breed, and Chicago’s Lori Lightfoot are among those who increasingly seem to be leaning on cops to stop shootings. “It’s time that the reign of criminals who are destroying our city…come to an end,” Breed said in a news conference in December, vowing more aggressive policing.

But a major new study—highlighted this weekend by the Chicago Sun-Times—provides some of the best evidence yet that these mayors should not turn their backs on other, non-policing solutions to gun violence. University of Chicago researchers looked at a mentoring program that serves men with extensive rap sheets who are at a high risk of shooting someone or being shot. During the 18-month READI Chicago program, the men, many of whom have been shot in the past, are paid $15 an hour to join daily job training and counseling sessions, activities that can get them off the streets and help them support their families without throwing them in jail.

The results have been impressive. The researchers followed 2,500 men who participated in the intensive program. This group was two-thirds less likely to be arrested for a shooting or homicide than a similar group of men who didn’t participate. The results were even more astonishing for guys who’d been recruited to the program by outreach workers: Their arrests dropped nearly 80 percent. And they were half as likely to be shot and killed themselves. That’s a lot of impact for a program that costs about 1 percent of what the city of Chicago typically spends on policing.

The study is particularly exciting because of the rigor with which it was conducted. It was a randomized trial, which means it was the first one of its kind to examine a large group of men from an anti-violence program with the same degree of statistical precision that you’d see in a study to evaluate medical treatments. “These are significant results,” Roseanna Ander, executive director of the University of Chicago Crime Lab, which conducted the study and helped develop the READI curriculum, told the Sun-Times. And perhaps the Biden administration is paying attention: It recently invited Eddie Bocanegra, who helps lead READI, to serve as a special advisor on gun violence.

When I saw the Chicago study, I couldn’t help but think of a similar mentoring program in Oakland, California, that I examined in 2020. I followed Andre Reed, a thirtysomething man with a lengthy criminal record who had been referred to the Community & Youth Outreach program after he was shot eight times. The program paired him up with a life coach, Leonard Haywood, who helped him turn his life around and became a close friend.

[The life coaches] would sit it down with the guys and see if they wanted help with any immediate needs, like avoiding threats from a rival gang or finding housing. But the coaches’ main goal would be to spend time with the participants and build trust, even with men who were still involved with a street group or didn’t want a job. “Just because you aren’t motivated in the beginning, it doesn’t mean we give up on you,” says Haywood, who has been working as a life coach for eight years. “It’s not just a Monday-through-Friday, job-related thing. It’s deeper than that.”

In 2018, fewer than 1 percent of the men who went through Oakland’s Community & Youth Outreach coaching program were rearrested for shootings. And the city’s shootings plummeted by more than 50 percent from 2011 to 2017, a major win. With help from his life coach, Reed found a job at an automotive factory, built up his confidence as a father, and broke the cycle of involvement with the criminal justice system.

Of course, the pandemic has complicated things for programs like these. Oakland’s life coaches told me in early 2020 that they were struggling to meet their clients in person because of lockdowns. And high rates of unemployment and isolation make it more likely that some people will turn toward crime. But if anything, that seems like even more reason to give these life coaches more resources to do their jobs.

adminhttps://australianinternetmarketing.com
Previous articleHosting Tips You Have To Know
Next articleRwanda genocide: ‘I forgave my husband’s killer – our children married’