5 Candidates Who Could Help Trump Steal the Presidency 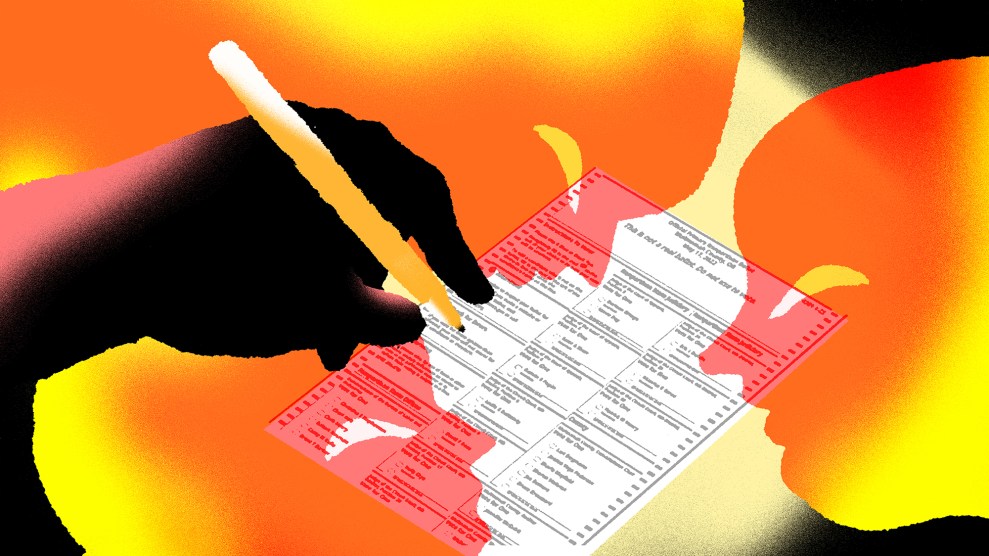 National elections in the United States are administered by local and state officials. Here are a few candidates sympathetic to Trump’s election fraud claims, who, if they win in November, could help him or another Republican steal the 2024 race.

In Nevada, county commissioners approve election results, and Herman voted against certifying the 2020 outcome in the state’s second-largest county. She has pushed to curtail the use of voting machines and wanted National Guard troops posted at election facilities. If she wins reelection this year, she might have company on the commission. Mike Clark—a Republican who won’t say whether he thinks Joe Biden was “duly elected”—knocked off another incumbent in the primary.

Federal judges smacked down Trump’s efforts to overturn the election, but some state-level jurists proved more pliable. Michigan’s high court narrowly voted to throw out a lawsuit seeking to undo Biden’s victory. Zahra—one of three dissenting Republicans—didn’t say how he might have ruled. But in a related matter, he declared that Trump supporters had made “troubling and serious allegations of fraud and irregularities.” Zahra is up for reelection, as is one of the Democratic justices who ruled against Trump.

DePerno helped turn a minor vote-counting error in rural Antrim County into a major piece of the conspiracy theories surrounding Dominion voting machines. If elected, he’s promised to “prosecute the people who corrupted the 2020 election”—including Michigan’s Democratic secretary of state.

Finchem, a state representative, did everything he could to reverse Biden’s victory, including falsely telling the Department of Homeland Security that an Arizona House committee had uncovered evidence of voting machine “irregularities” and had “probable cause to believe that a crime has been committed.” He was scheduled to speak at Trump’s January 6 rally (though he didn’t enter the Capitol). If elected secretary of state, Finchem will oversee elections and certify the results.

Like Finchem, Mastriano was at Trump’s January 6 rally but apparently didn’t enter the Capitol. Prior to this year’s GOP primary, Democrats ran ads boosting Mastriano, thinking he’d be easy to beat in November. If he wins, they’ll really regret it. Mastriano has pledged to revoke the state’s contracts with “compromised voting machine companies” and eliminate universal mail-in voting. He’d also get to pick the secretary of state who will certify results in 2024.